I’ve been training more and more football players lately. Guys of all walks, college to the pros. And I thought it’d be perfect to share more of my advanced football strength and conditioning workouts with you. So, whether you’re a coach or a player, you can see what an elite, advanced football strength and conditioning workout looks like.

Forward Pogo Jumps are one of my favorite drills to build up the explosive capacity of the ankle. Most coaches overlook the lower limb, but more and more I’ve been uncovering how important training the foot and ankle is. And more importantly how big of a role it can play in your sprinting and jumping ability. 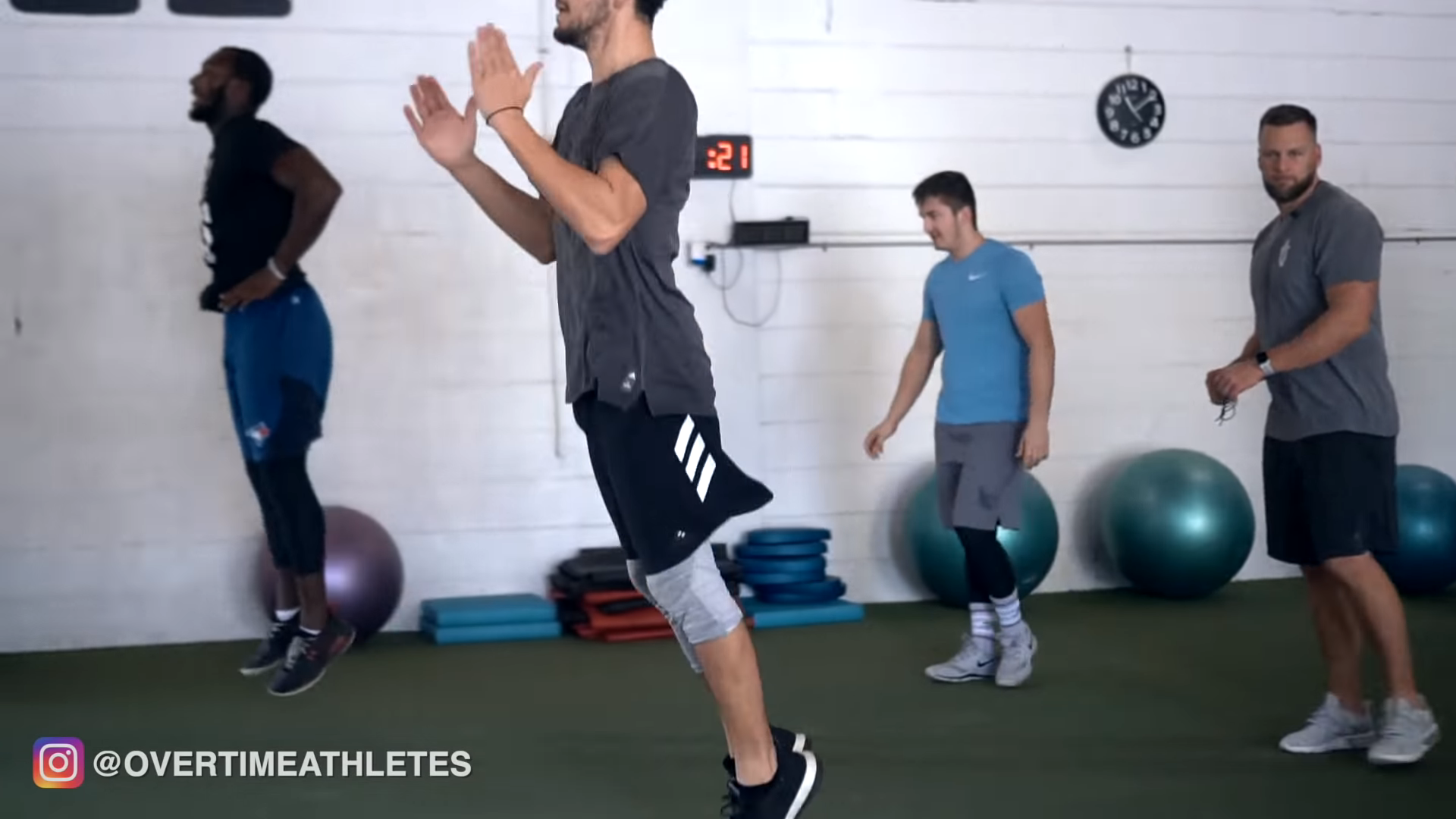 How to Perform Forward Pogo Jumps: Push off the the ground using as little knee as possible. You want to elevate as high as possible, getting as many jumps as you can in the allotted distance. Land softly and swiftly transition into your next jump.

Alternating Pogo Jumps build the explosive capacity of each ankle independently. This move will address any left to right imbalances in the ankle and foot. This will result in more speed and a higher vertical as well.

How to Perform Alternating Pogo Jumps: Start on one leg and push off the ground using the ankle, as little knee and hip as possible. As you descend toward the ground, make contact with the opposite foot and repeat.

Half Kneeling Starts are an acceleration drill that forces the athlete to produce horizontal force through a deeper range of motion than is required for sport. This will enhance his ability to accelerate on the field out of different positions.

How to Perform Half Kneeling Starts: Start on one knee with that ankle cocked. The other foot is flat on the ground. Get a forward lean in the torso and make sure your front knee is past your toes. Explode out from there.

Lateral Half Kneeling Starts are the same as normal half kneeling starts except they increase the athlete’s ability to accelerate laterally. This is a key movement for athletes who constantly change directions, cut, and make other adjustments laterally:

How to Perform Half Kneeling Starts: Get into the same kneeling position you did for the half kneeling starts. Face a wall. Explode out laterally while maintaining sound acceleration position.

The Two Point Start is one of my favorite drills to analyze and elevate the acceleration mechanics of an athlete. It forces the athlete to reveal his weak points, if he has any, and then fix them with various drills.

How to Perform Two Point Starts: Begin in a two point stance, lean forward, and explode horizontally. Maintain your forward lean, and continue to produce as much force horizontally as possible for as long as you can.

The Broad Box Jump combines a box jump with a broad jump. It forces the athlete to produce force horizontally while landing on a raised surface. This can be very challenging for most athletes and it’s very advanced. I only advise doing it if you have ample training experience.

If you do have the ability to perform it, it’s a powerful tool to build your athleticism.

How to Perform a Broad Box Jump: Start about three to five feet away from the box you want to jump onto. Produce as much force as you can horizontally while still getting up enough to land on the box. After each successful jump, increase the distance between you and the box.

The Broad to Vertical Box Jump forces the athlete to work on the transition phase of their jump. This will carry over to their stride on their sprint as well as their change of direction. If we can lower the athlete’s ground contact time while jumping, he will become overall more explosive.

How to Perform Broad to Vertical Box Jump: Start a six feet away from a raised surface. Broad jump to about a foot in front of the box then transition to a vertical jump to land on the box. Challenge yourself to spend as little time on the ground as possible, and increase the distance from the box after each successful jump.

8. Lateral Broad to Vertical Box Jump 3×1 each side

This drill is similar to the broad to vertical box jump except you’re starting with a lateral broad jump instead of a standard broad jump. The lateral jump increases the difficulty of the drill as it requires lateral power and the body control to rotate in the air and land in a good position to produce vertical force.

How to Perform Lateral Broad to Vertical Box Jump: Start about six feet away from a raised surface. Lateral broad jump to a foot in front of the box landing facing the box. From there, transition into a box jump. Challenge yourself to spend as little time on the ground as possible and transition into your vertical jump quickly.

The standard box jump is pure vertical power. You just want to raise the box as high as you can and let loose here.

You might already know that tempos are a staple in my training. This is because you can elicit different neuromuscular responses based on your use of tempos. Here, we’re just working the eccentric portion of the movement with a short hold at the bottom position to stimulate some motor unit recruitment.

Build up to a heavy set of three reps here.

Challenge yourself to beat your previous distance each time you perform this.

DB Elevated Reverse Lunge is one of my favorite movements. It’s a unilateral movement that mimics the acceleration position. The elevation builds the strength of the muscles targeted by the movement through an extended range of motion.

In other words, this movement carries over to the field almost seamlessly.

This advanced football workout finishes with some explosive core work. This movement works the core’s ability to accelerate and explode, then decelerate as the athlete catches the ball.

My number one training resource for football players at the moment is Athletic Speed System.

Speed is obviously a critical factor in football. And to get it, you need to build strength, power, and explosiveness.

All of that is covered in Athletic Speed System. 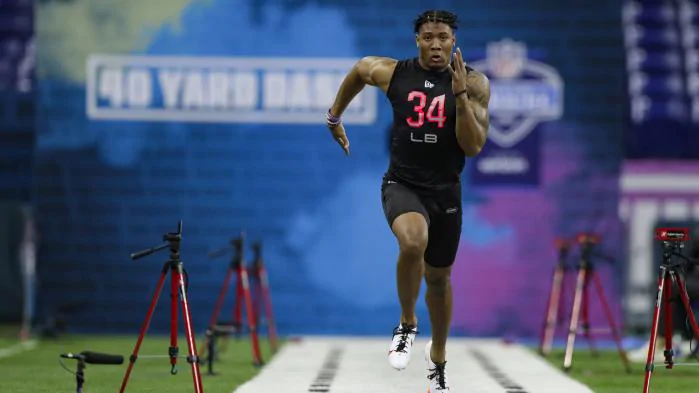 In fact, the programming in Athletic Speed System is so effective, I guarantee it’ll shave time off of your 40 yard dash in 30 days or less, provided you use the program the way it’s laid out.

That’s a bold promise. But, one I have 100% confidence in because hundreds of athletes have taken Athletic Speed System for a ride.

You can be next, and you can do it for a heavy discount at the link below:

===>Click Here to Jump Higher, Get Stronger, and Shave Time off Of Your 40 Yard Dash in 30 Days or Less