If you want to make the team, grab that college scholarship, or get handed that big league contract… It’s more important than ever that you become a five tool player. You need speed, power hitting, contact hitting, fielding, and arm strength.

And while strength training can’t help with all of them, it can help with most.

Today, I’m going to share a workout that can help with your arm strength, power hitting, fielding, and speed.

Change of direction drills that will help your fielding

And of course some single leg plyometrics and some strength work that will help with power hitting and arm strength.

Lateral pogo jumps are a critical base builder for change of direction and agility. They get the athlete used to producing high amounts of force through the ankle while inverting/everting. Inversion and eversion of the ankle is an ankle action that occurs when rapidly changing directions.

This is another change of direction/agility drill that works on the base. This time, the athlete is working hip abduction/adduction, another critical action for efficient and smooth change of direction. To perform this foundational drill, all you’re doing is pushing laterally off the back leg as hard as you can, recovering, and smoothly transitioning into that next push.

This is the same drill as the previous one except the focus is on the front leg instead of the bag. Again this works inversion/eversion of the ankle and hip abduction/adduction. This movement kind of looks similar to a carioca, except the bag leg drags behind as you push off the front.

For this drill, start in your stance like you’re coming off a bag. From there you’re going to keep your shoulders and chest square to an outside wall while your hips stay square to your destination. Run towards that destination (should be 10 yards away), then sprint back facing the same way.

Lateral cone hops can be used as a foundational plyometric, but you can also EASILY increase the difficulty by increasing the space between cones. Either way, I recommend starting easy, then raising the difficulty, because this is an easy drill to get injured on. However, if you do it right, that risk is low.

Either way, for this drill, start on leg and move from cone to cone as quickly as possible. Spend as little time on the ground as possible, except when you reach the last cone, pause for one second. After the pause, move back to where to came from. Repeat on the other leg.

Another important note is you want to repeat this starting at each of the far cones to get the same stimulus in both legs.

Lateral Broad Jumps 2×4 Each Side

Lateral Broad Jumps are a great movement to build lateral power in an athlete. They’re easy to perform, but hard to master. A great trick you can use to build your lateral broad jump efficiency is to perform a lateral broad jump and mark your distance with a cone. Each time you perform a subsequent jump, try and beat that mark. This provides you with biofeedback that lets you know when you’re performing the drill correctly.

There are two skater jumps for this workout. The first is a traditional skater jump, where you jump from one cone to another and then back. It’s important that you get as vertical as you can with each jump while also reaching your target cone. Stick hard, then jump back. This will build lateral power as well as body control.

The next progression is a skater jump with a reaction. For this movement you’ll jump to the cone like you do with a regular skater jump, then perform a quick reaction jump back to where you came from. Your goal should be to spend as little time on the ground as possible and stick your landing.

I always perform a shoulder pre-hab series before I jump into an upper body workout. I created a blog post with a long list of shoulder mobility drills for baseball athletes. Grab a few from there to get properly warmed up.

I love using the single arm dumbbell bench press. Especially with baseball athletes. It builds core stability, balances out left to right imbalances, and provides a challenging stimulus to the athlete. Make sure you have your shoulders down and back when you perform these, and keep your non working hand on your stomach. 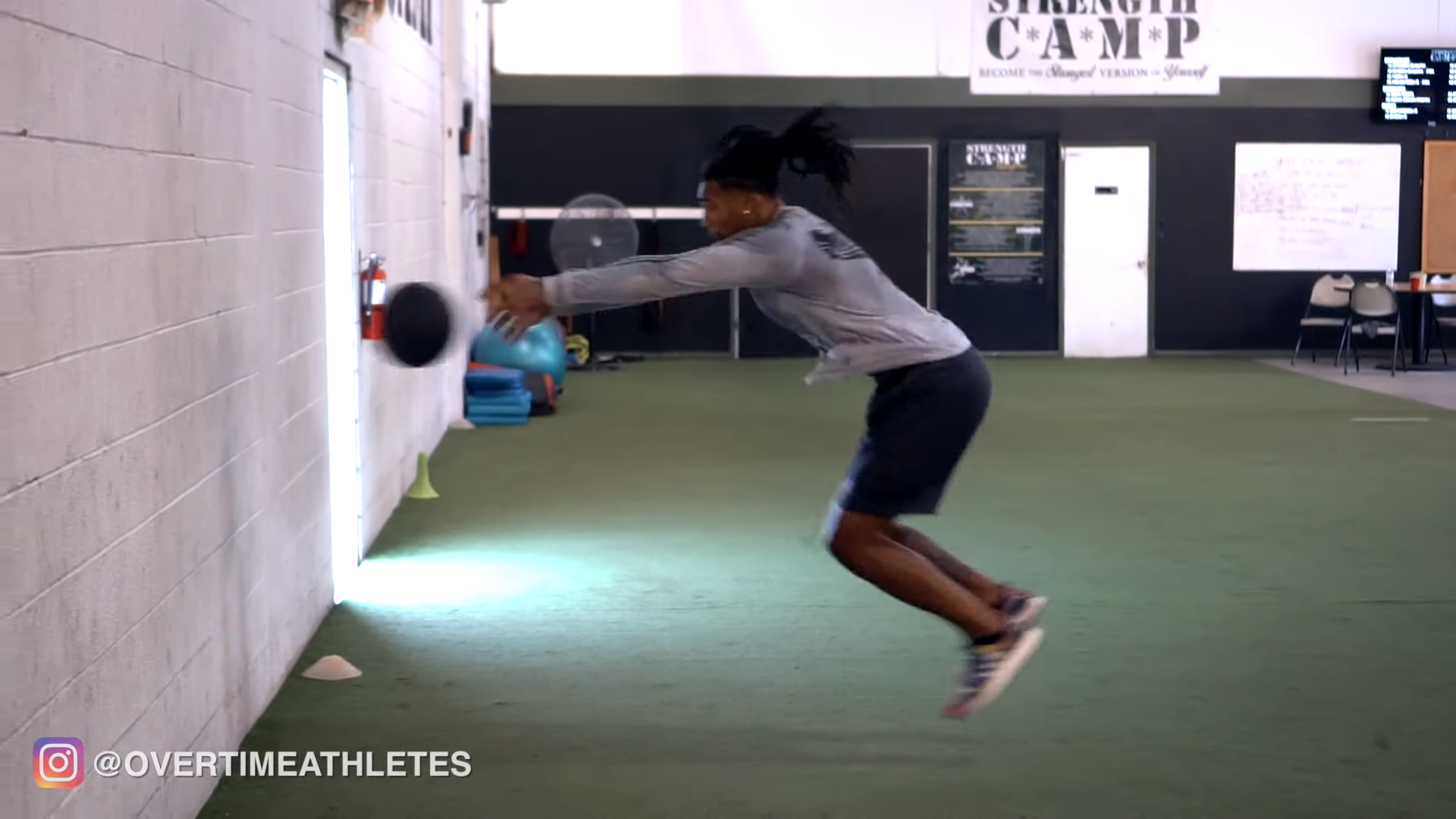 The single arm MB chest pass works the athlete’s ability to transfer power through the hip, core, and out the upper extremities. This same thing happens during your swing. In other words, this movement can help you develop a more powerful bat.

An important thing to keep in mind here is that every time you perform this move, you should lead with your hip. Lots of athletes like to use just their upper body, but recruiting the hip will result in a more powerful throw

You’re going to perform 40 neutral grip pull-ups in as little sets as possible. This will challenge you to bust through any barriers that you may be restrained by.

This is a shoulder health exercise that’s great for baseball players. ITY’s work the small muscles in the upper and mid-back responsible for deceleration. Many baseball players have strong accelerators, but weak decelerators, which is the source of some of their shoulder issues.

This movement builds up the triceps and allows you to move the resistance as quickly as possible without the need to decelerate. This can have some carryover to your arm strength.

If you’re serious about your baseball performance, and want a whole host more of workouts like this one scheduled for maximum power and strength gains… Check out Baseball Power Program.

It’s the exact programming I use to build Major Leaguers.

And it’ll help you wherever you’re at physically.

For more information, head over to the link below: