Whether you’re new or old to training, it’s always a good idea to utilize movement patterns and exercises that actually work. Today I wanted to discuss what is a medicine ball and how to use in your power training since it’s such an effective modality for my elite athletes across all sports. 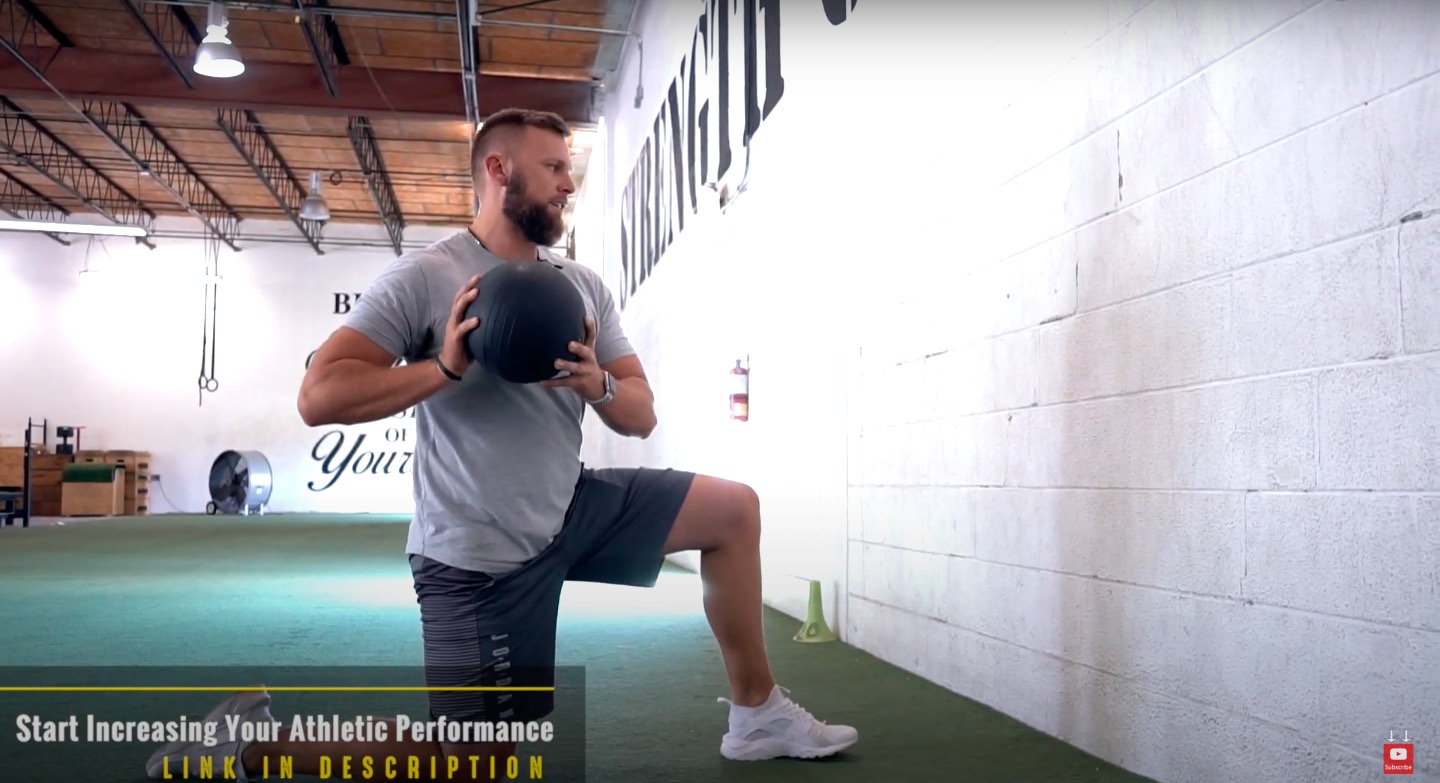 What is a Medicine Ball?

A medicine ball is a weighted ball used for training purposes and especially helpful within sports medicine since it can help to build strength and neuromuscular coordination.

The shape of the medicine ball allows you to use it for a variety of exercises as well as active, dynamic, power tosses and slams where you can practice how to elicit max amounts of power that reflect into your sport. For example, I’ll often have baseball players use a rotational toss with the med ball as this creates the same muscle pattern as hitting or pitching might. Unlike a barbell or dumbbell that would cause a bit of damage, you can throw around the med ball, slam it on the floor or the wall. This allows you to practice very similar, if not identical movement patterns to those performed during athletic events. Almost no other piece of equipment allows you this sort of range or power behind your movement so I love taking advantage of these easy to use, and simple to have around tools.

Medicine balls are also excellent to have at home if you don’t have access to a full gym or weight room since they’re quite small and easy to store. I would recommend however to only slam medicine balls on a concrete or load-bearing appropriate floor like you’ll find in a gym. That way you don’t put a hole in your floor or disturb your downstairs neighbors…

The medicine ball toss is often used for a power-focused movement whether it be with baseball players working on follow-through or to even just develop sprint ability using the med ball for a strength component of training. Particularly while working on movements like a throw, pitch, or toss, the follow through is just as important as the first part of the movement. That’s why using the medicine ball toss can be beneficial to building proper form and strength through the entire exercise.

Here’s a workout with some of my favorite medicine ball toss exercises:

We started out this workout by isolating and elevating. Start this drill out from your knees for an isolated med ball soccer toss where you bring the med ball from overhead and slam it on the ground in front with all you’ve got. A great way to step these up are by having a partner toss the med ball back to you after the bounce so that you have to catch the load and transition it back into a toss.

From there we’ll get a little bit more dynamic, coming up to our feet for a one step toss. Starting with the med ball behind your hand, start to walk forward taking just one step before you slam it at a wall. I always encourage my guys to step forward using their less dominant leg in order to balance strength in the body.

Finally we can move even more adding in a crow hop. Build up a little momentum taking a step forward before hitting a small crow hop and tossing the med ball overhead at the wall. Focus on planting the front leg and release the trail behind you.

The next phase involves a bit more integration where we’re on our feet. Now the drills will look and feel a little more specific to hitting. I tell my athletes to not think of this as swinging the bat, but set up as if you’re getting ready to bat.

Take your hitting stance, standing laterally to a wall. From here hold the med ball in both hands, loading below the hip and twisting into your far leg to set up for an underhand toss. Focus on loading the back hip, allowing you to push off for power and allowing the body to follow through.

Twist powerfully through the torso creating a whip-like effect, then follow through as though you would on a hit. Be sure you don’t push the med ball towards the wall but rather underhand toss then release.

You could make this movement even more dynamic by adding more movement before your twist. Do this by using a quick hop and step forward before you toss the med ball to create a bit more energy and then move into the wall. 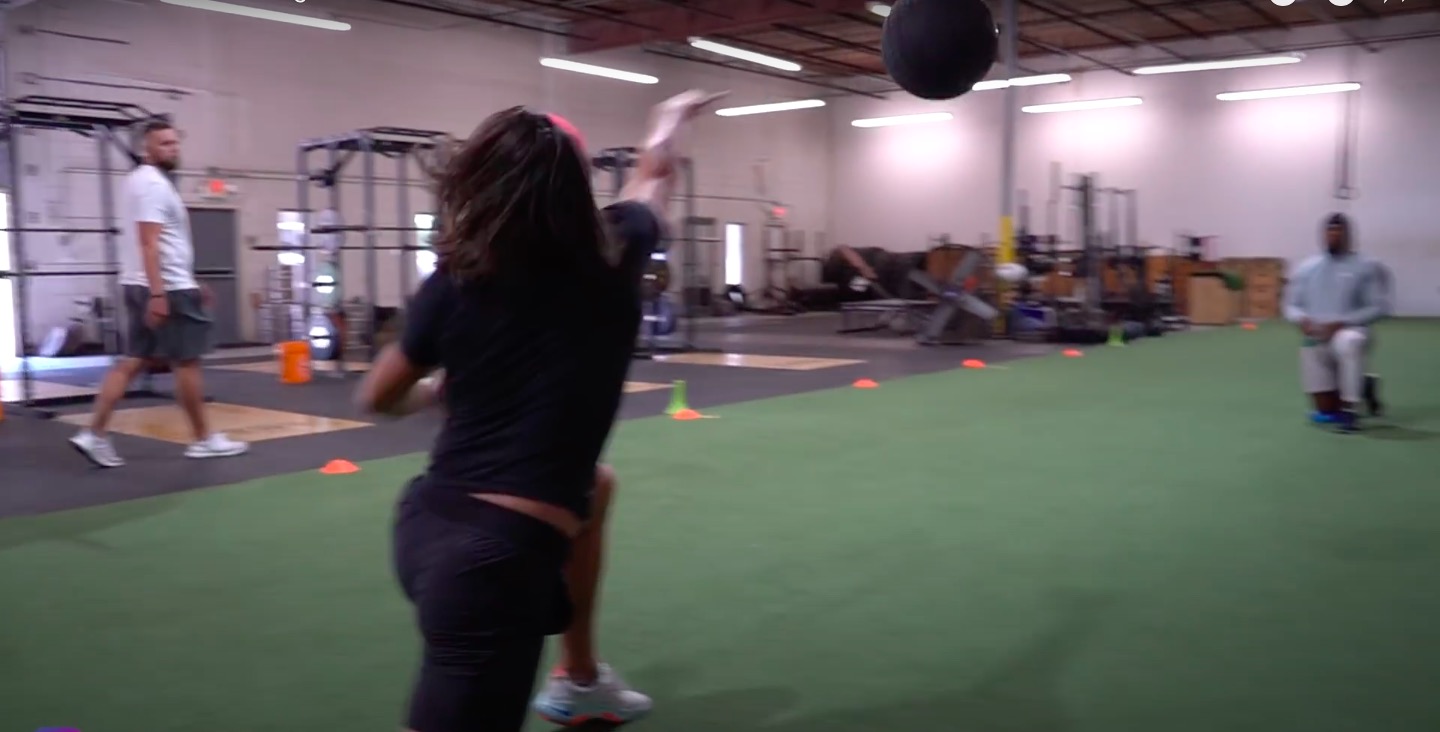 Each of the above exercises can have a number of variations depending on the type of adaptation you’re looking to achieve. For example the medicine ball underhand toss can be performed from a kneeling or half-kneeling position in which you’d just slightly change the base of support on the ground by adding and removing stability via one or two legs or from kneeling to standing.

Any exercise you do from kneeling or half-kneeling will require a bit more torso and core since you are isolating the top half of the body and eliminating the strength from your legs. I recommend using the medicine ball toss for a variety of movement variations including rotation, vertical and horizontal press. You can also add the medicine ball to other movements for an easy to move load such as a a broad jump with a med ball toss.

If you don’t have a medicine ball or can’t use one for your workouts, another option would be a movement with plenty of power behind it. A great medicine ball toss alternative is anything using a kettlebell such as a clean, swing, or snatch. The way the kettlebell is shaped allows you to get that same feeling of “throwing” weight away from your body. Another alternative might be a broad jump or a vertical jump which we often use the medicine ball to increase.

You need to check out the Athletic Strength Formula, a scientifically proven program to increase your squat, bench, and overhead. Medicine balls make great supplemental training tools. We based things off the three main principles of strength and power training…