Want to know one of the quickest ways to shave time off your 40 or 60? Or even one of the fastest ways to obtain a more explosive first-step? It comes down to your acceleration mechanics. 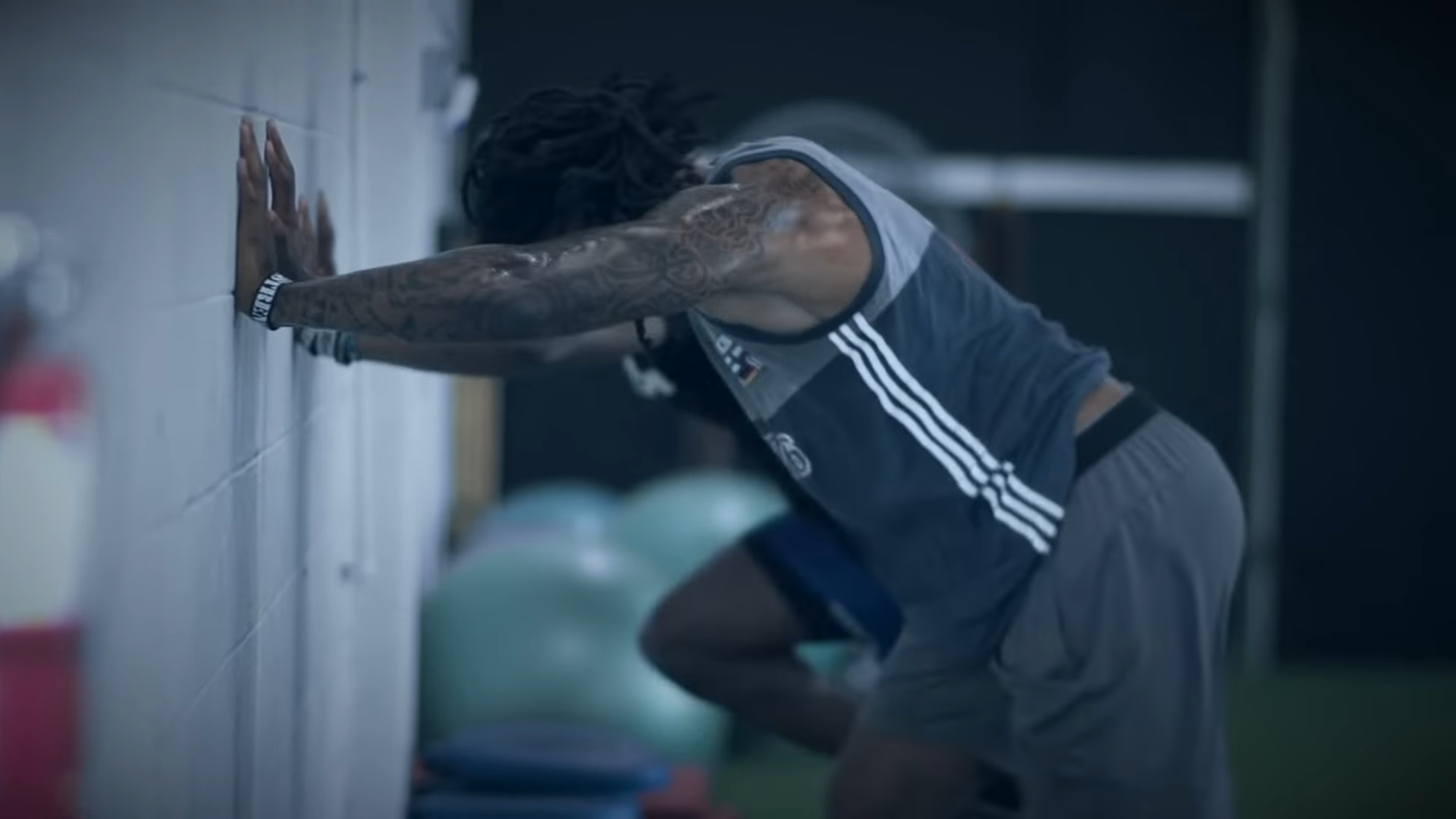 So, in this post, I want to plunge deep into acceleration mechanics.

Particularly my three-step process for sharpening your acceleration mechanics quickly. 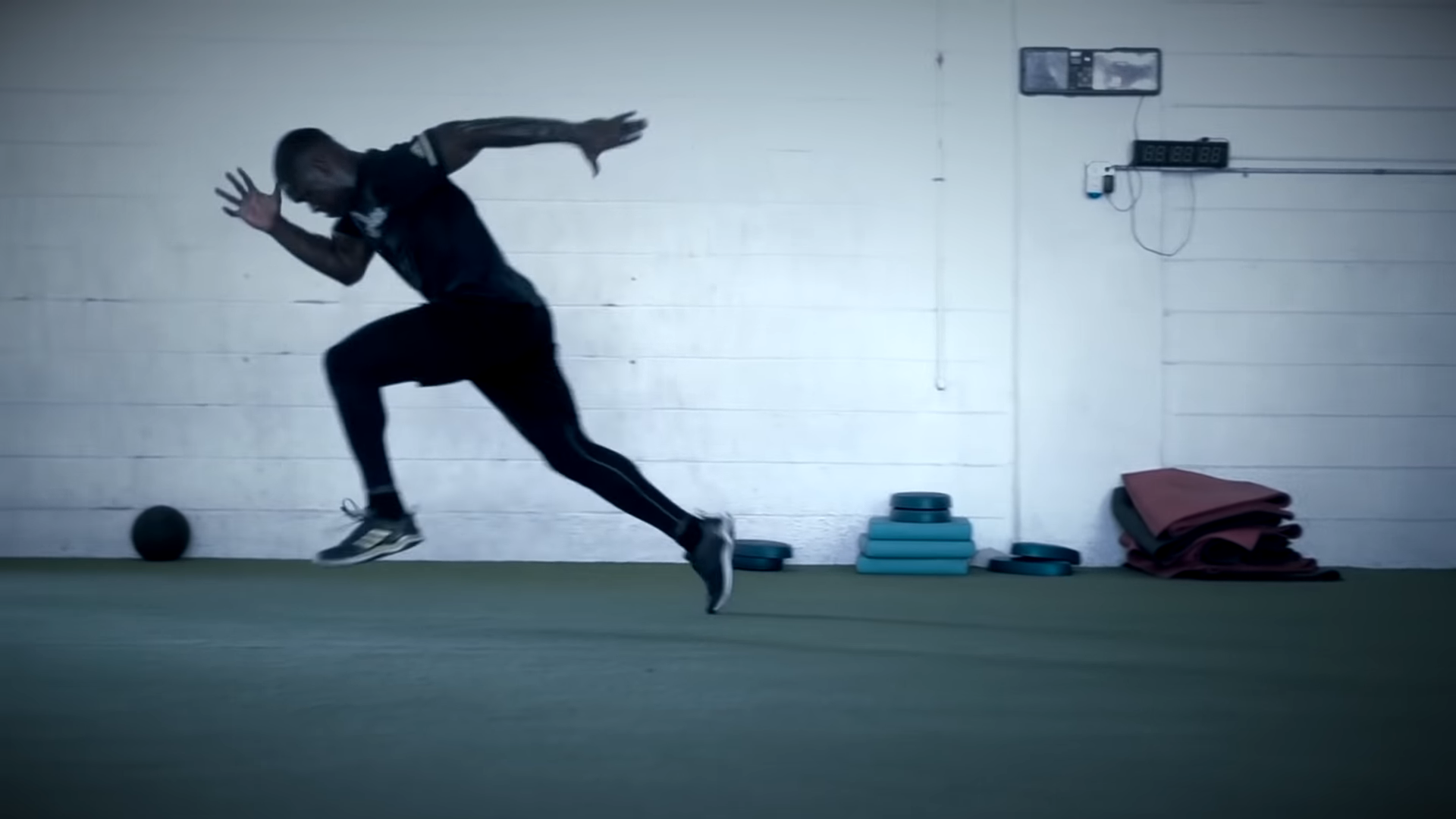 Acceleration is the rate at which you gain speed.  And it takes place any time before you reach your top speed.  It can be from a dead stop, or anywhere within the first 10 yards of a sprint. It can even take place when an athlete is doing a light jog and quickly explodes into a sprint. 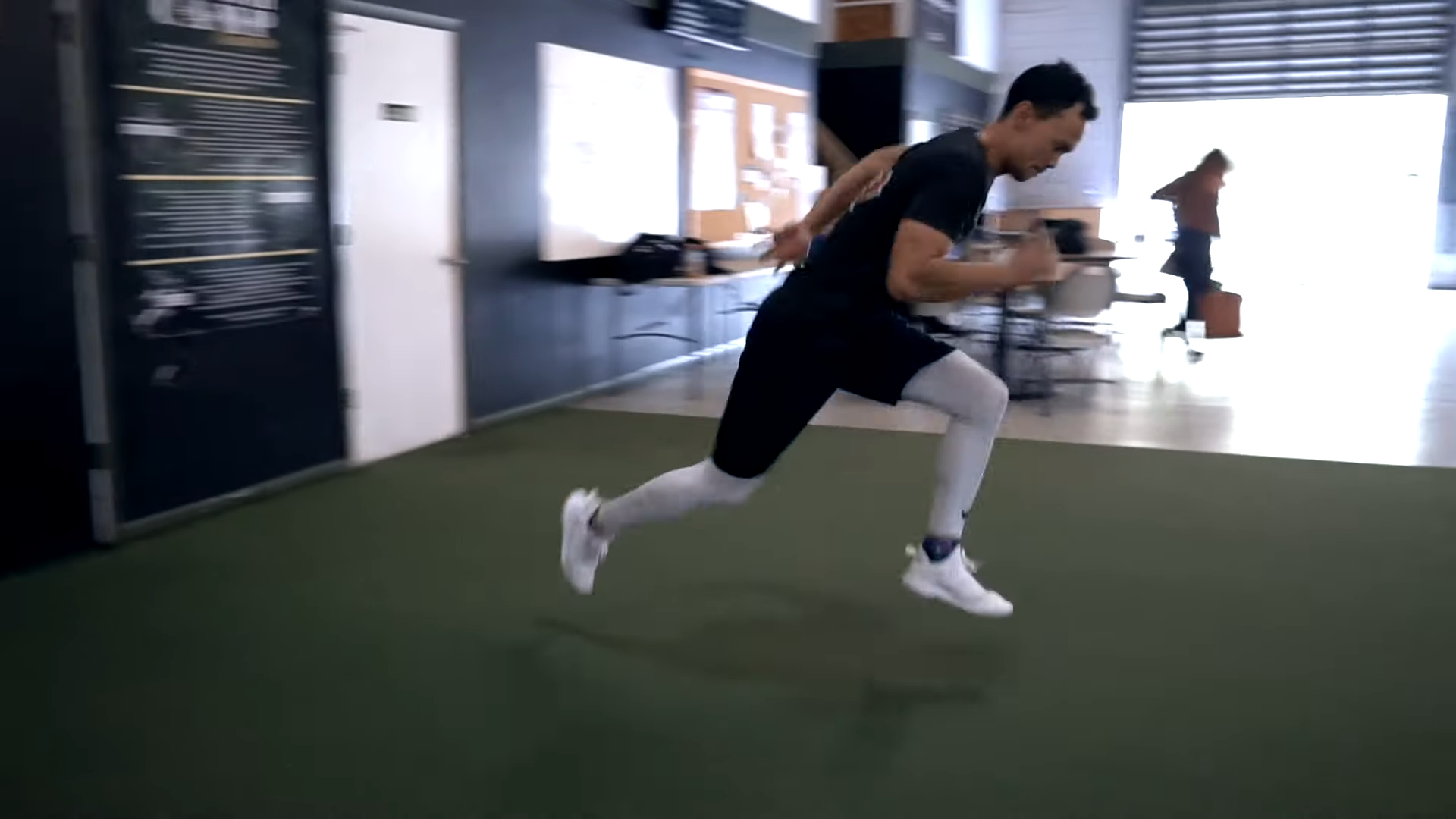 Whatever YOU need acceleration for, it’s important to know a couple of key facts about acceleration. These facts share the difference between a quick burst of speed, and a sad attempt at dusting your competition.

Fact 1: If you START the wrong way, you can’t correct it mid-sprint. (imagine starting a 40 yard dash the wrong way in front of scouts and coaches)

Fact 2: If you’re equal with another athlete in all aspects of a sprint besides the start in a 100m race, you’ll lose by a FULL SECOND (to put that in perspective, in Usain Bolt’s record breaking 100m race, second place lost by just .13 seconds).

Fact 3: The difference in velocity between a normal athlete and an elite athlete is 2 MPH after just the first step. With each subsequent step, that gap gets larger. 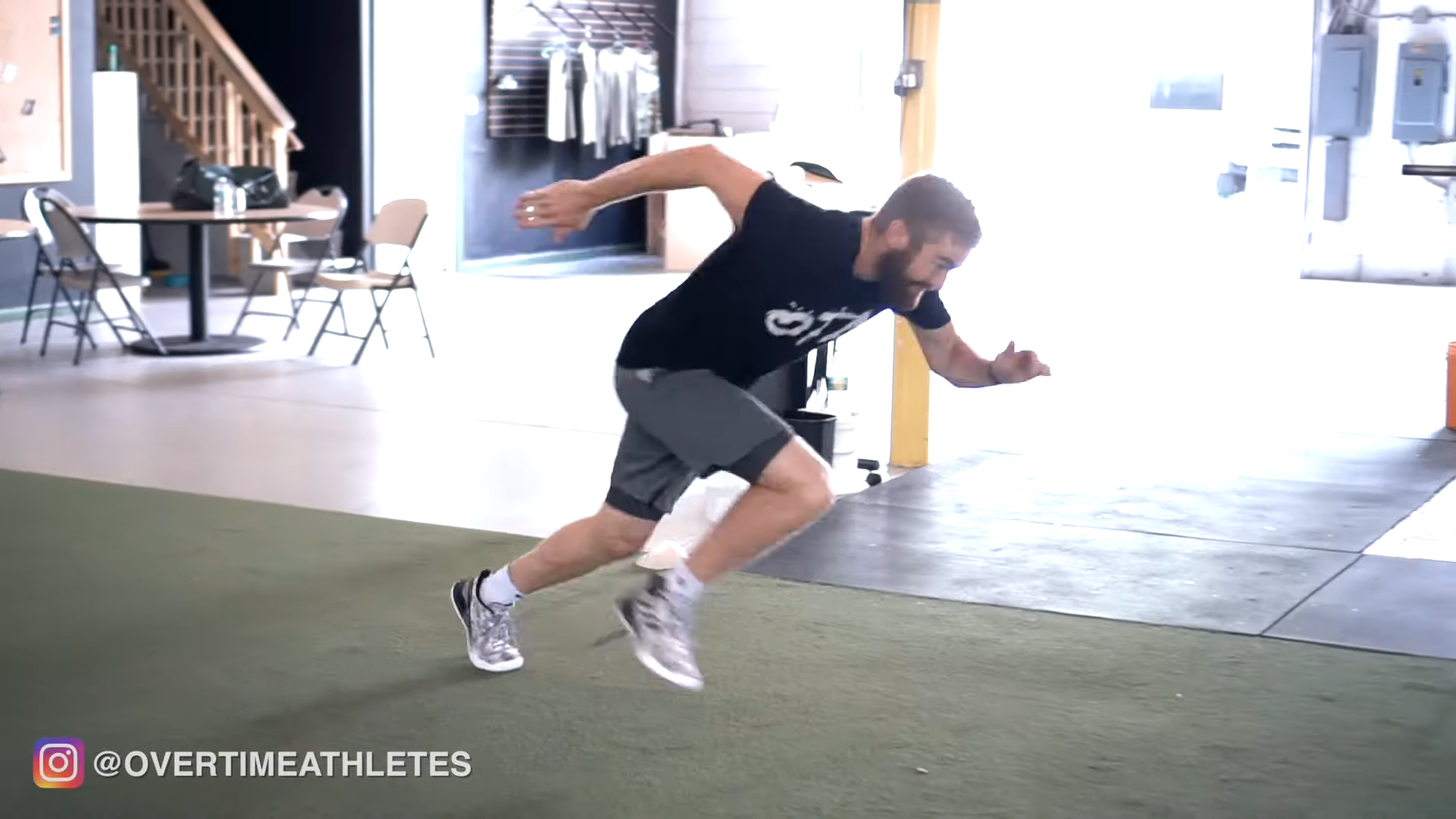 You don’t want to fall behind, right?

Well, keep reading, and I’ll share how you can avoid that.

Whenever I look at an athlete’s acceleration mechanics, I look at three things. First is their stance. This is the position from which they move out of.

The second thing is their start. An athlete’s start is the transition from their stance to their steps.

Finally, I take a look at the athlete’s steps. These are the first few strides of the sprint. And if you read the facts above, you know that the first couple steps of your sprint are what will determine if you’re dusting your competition, or falling behind them.

Below, I’m going to take a closer look at each of these steps…

As I said above, your stance is the position from which you move out of. When I help an athlete with their stance, I try to put them in the BEST bio-mechanical position to produce force out of. 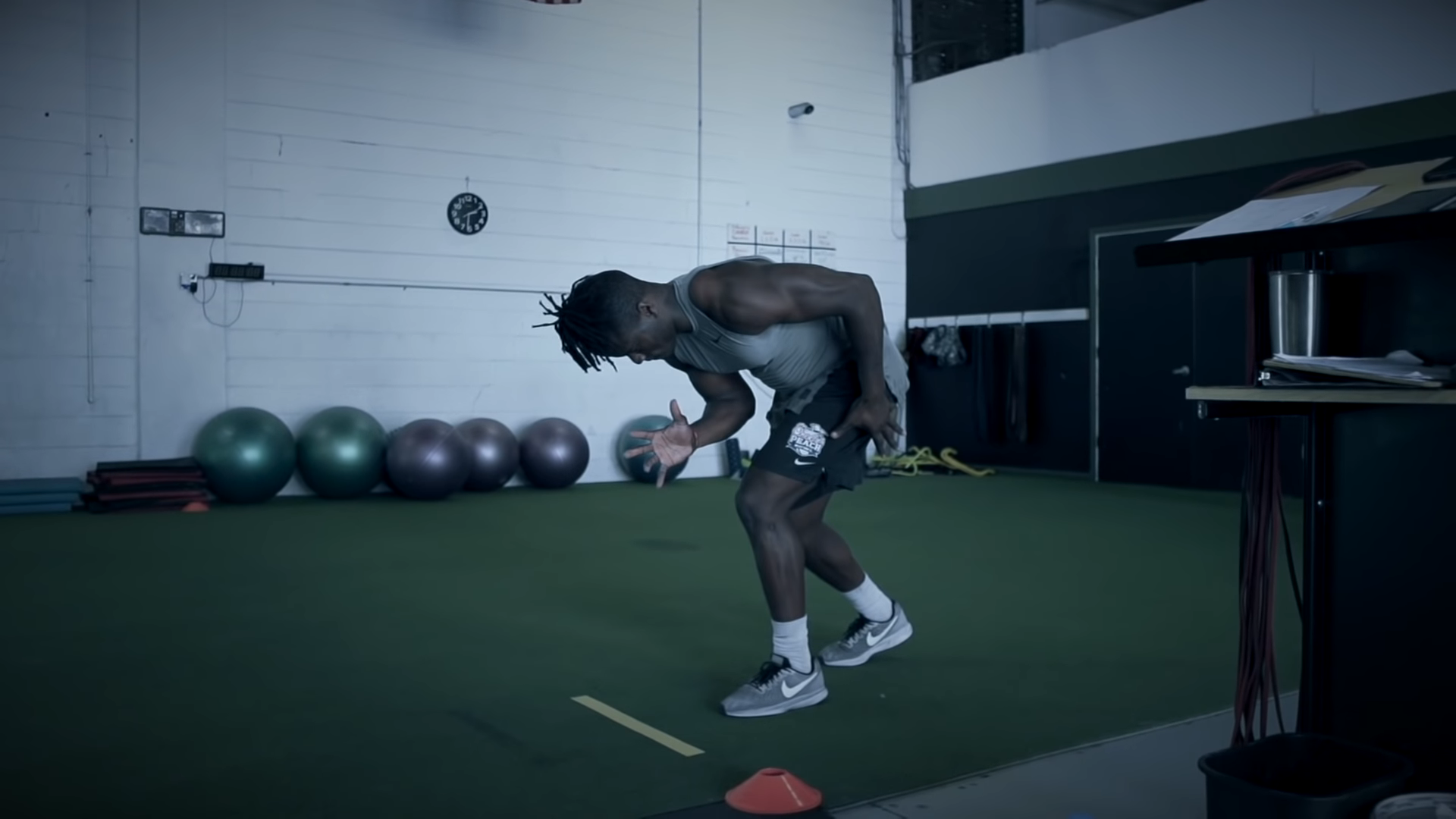 Now, an athlete’s stance will vary based on the test they’re performing (40 or 60), and their structure. By structure, I mean the particular body angles that are best for the athlete’s limb length and unique body biomechanics.

In general, the athlete will want a forward lean, and a positive shin angle. If you can nail down those two things, you’re already off to a good start.

The start is the transition from an athlete’s start to their steps. When I bring in an athlete who’s prepping for a camp or combine, the first thing I look at is their start. This is because, in general, they know their stance, but coming out of that stance into a sprint is where the problems begin to arise. 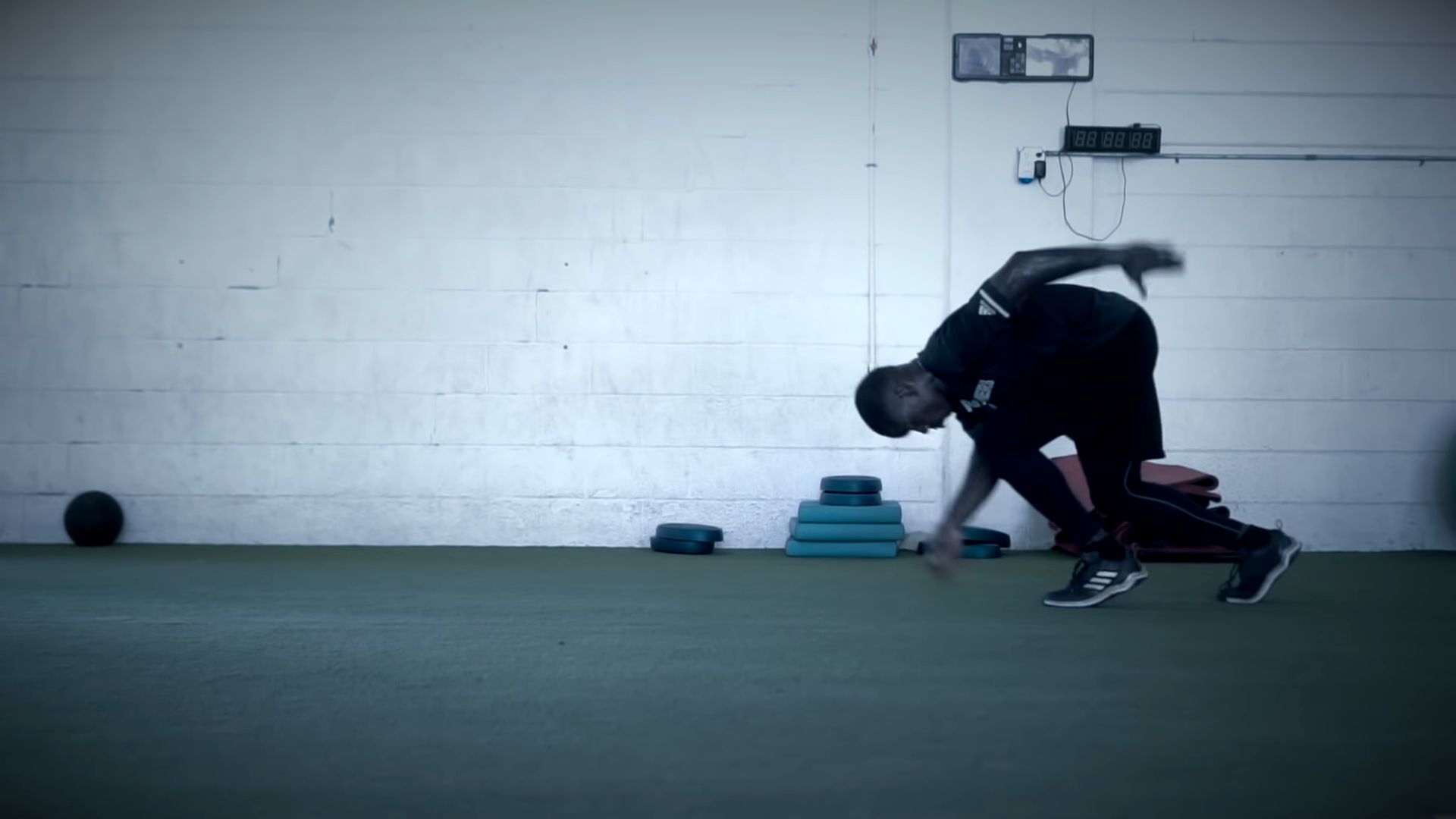 A common problem with an athlete’s start is their ability to produce force out of two legs.

Think for a second – if you’re performing a broad jump vs. a single leg broad jump, which one will you jump further on? That’s right a double-leg broad jump. 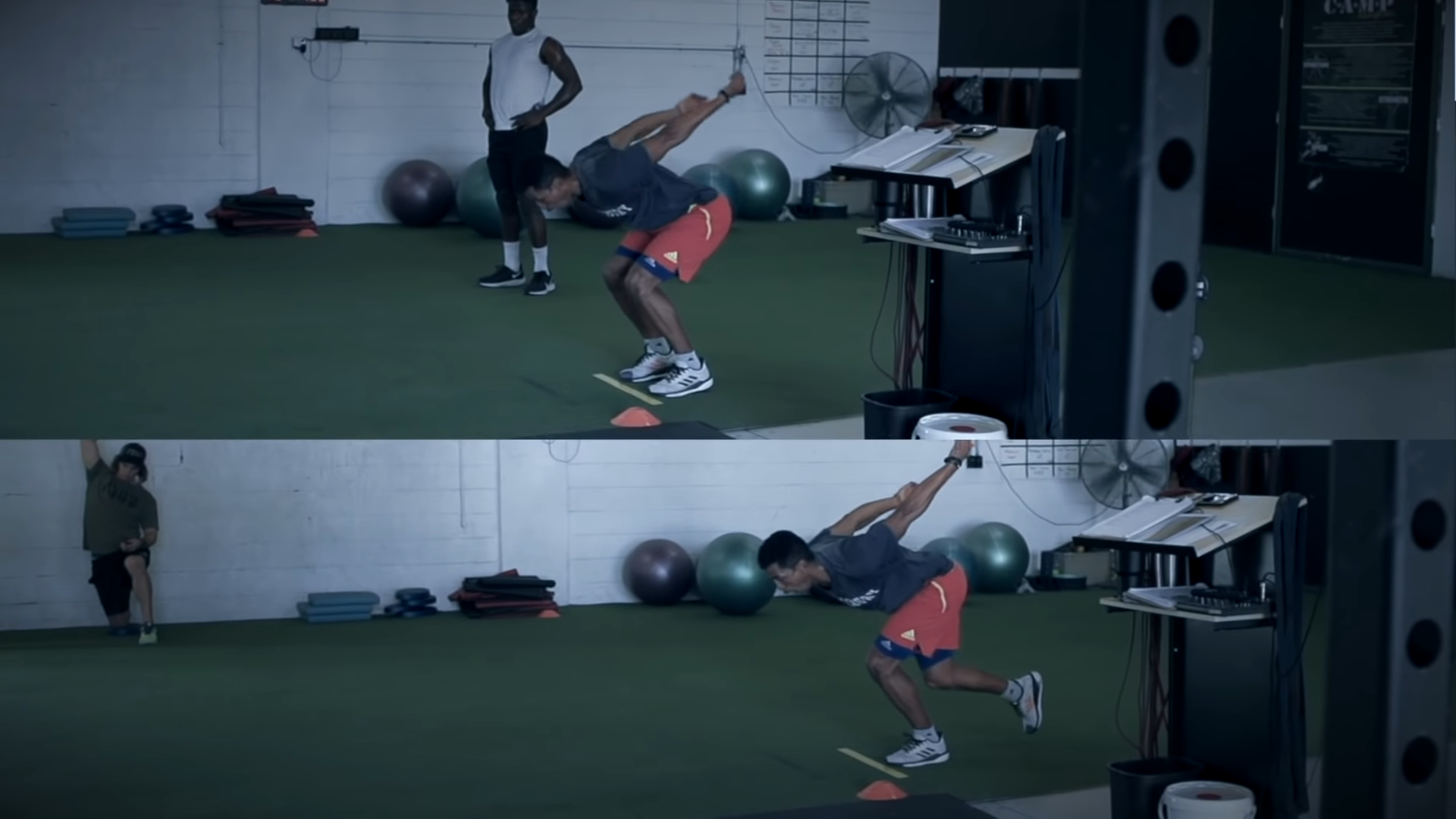 So, if I can get an athlete to use both legs in their start, they’ll be able to produce more horizontal force (KEY for acceleration). This should lead to better acceleration mechanics.

It’s also important to know that the start is not so important for game situations. Unless you’re a track athlete, running a combine, or you’re a baseball player, you’re not really going to emphasize the start too much.

Now, we get to true acceleration mechanics. Steps are the leg action for your first couple of strides after your start. This is the motion of your legs during the first 5 yards of your sprint.

Here, you want to decrease the amount of knee flexion (which leads to an inefficient cycling motion), and drive back into the ground to produce as much force as possible. When an athlete cycles, and their knee flexes, heel comes up towards their butt, they’re decreasing the amount of force they put into the ground. 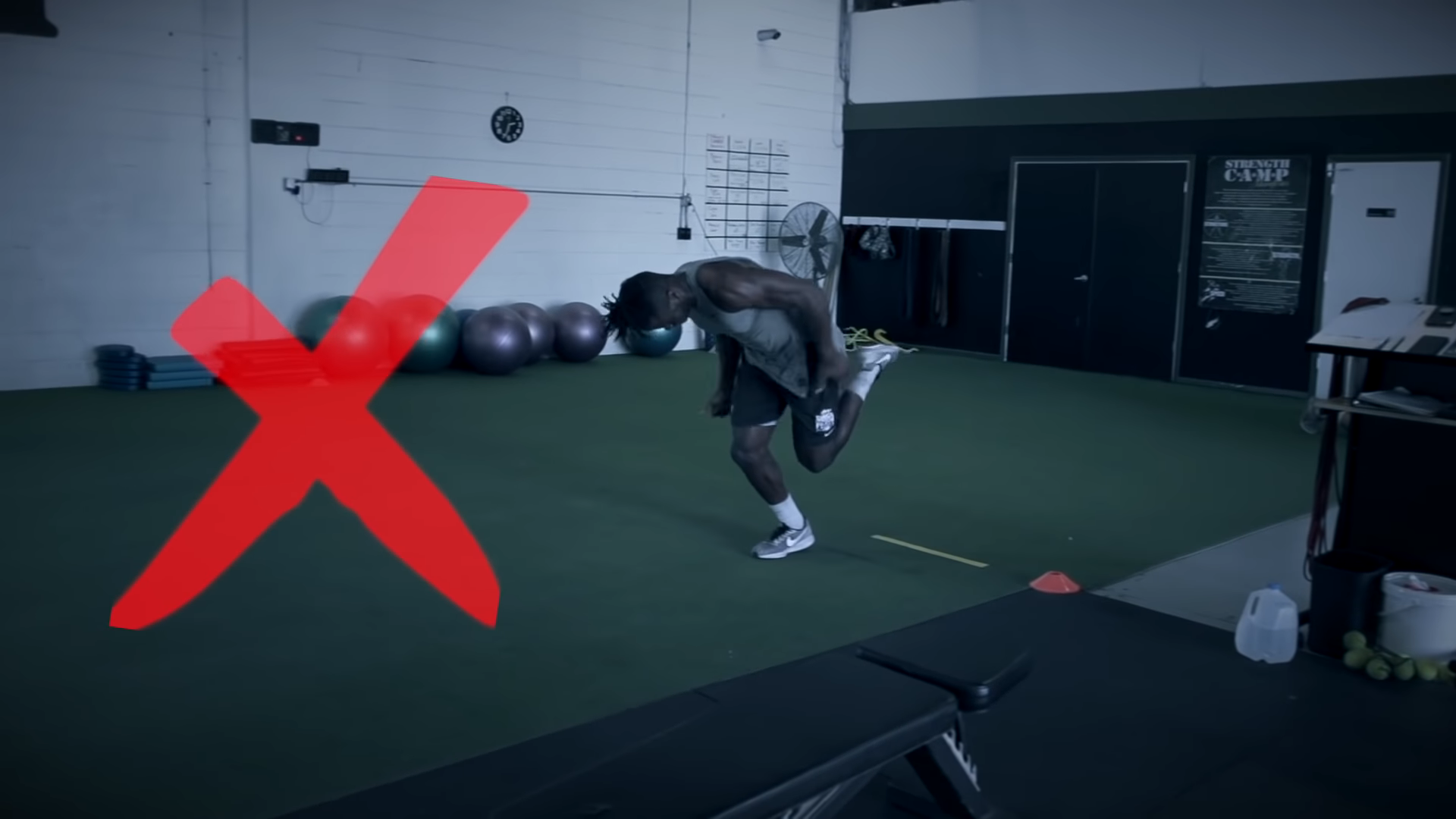 So, the goal is to increase the amount of force the athlete puts into the ground in an efficient manner.

This means they stay in frontside mechanics for their acceleration phase, they don’t cycle, and they maintain that forward lean. 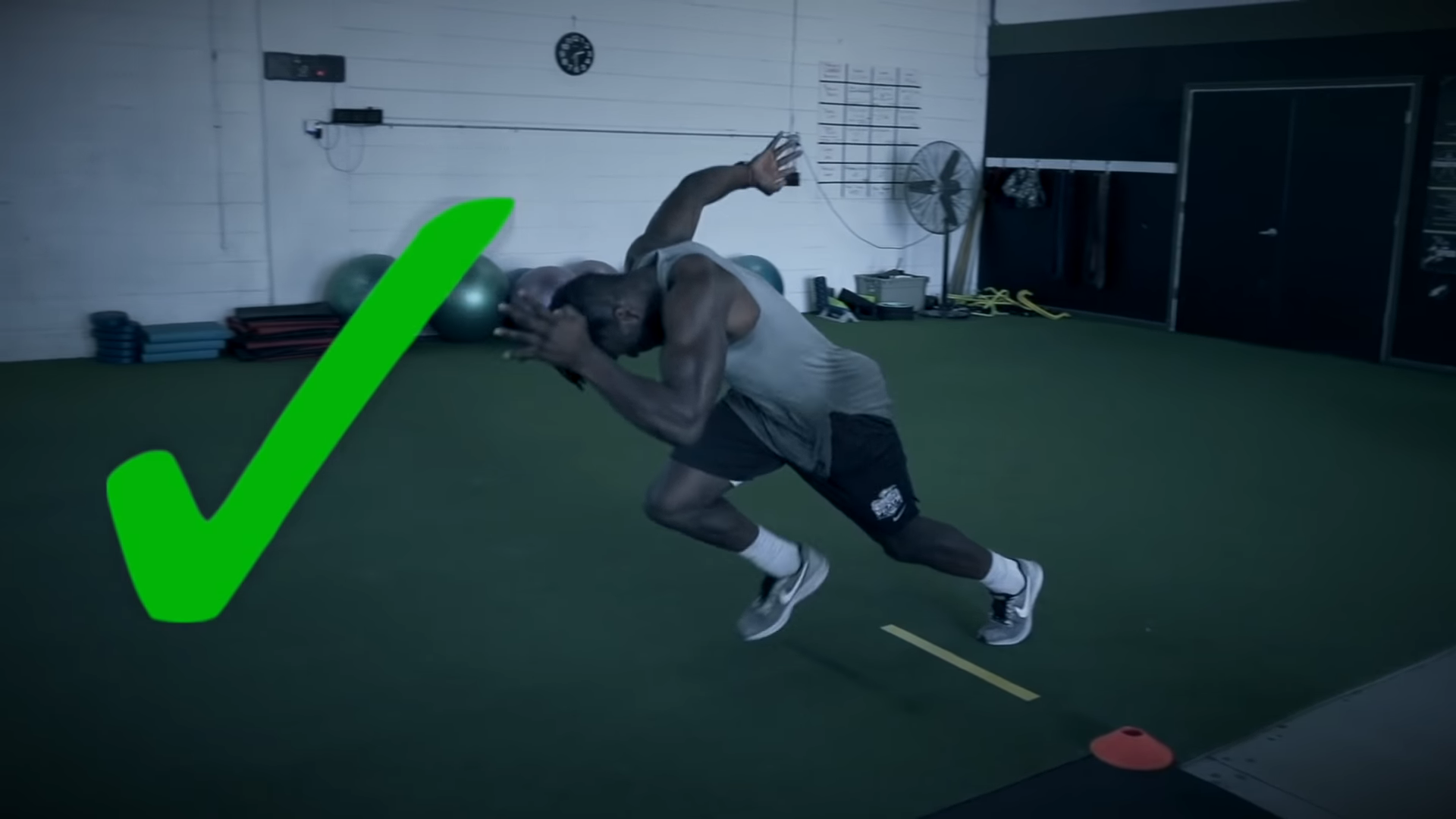 How to Sharpen Your Acceleration Mechanics

I’ve just shared my three-step acceleration mechanics process with you.

And if you feel like you need to sharpen your acceleration mechanics for more speed, first-step explosiveness, and athletic success… And you want this three-step process applied to your needs… 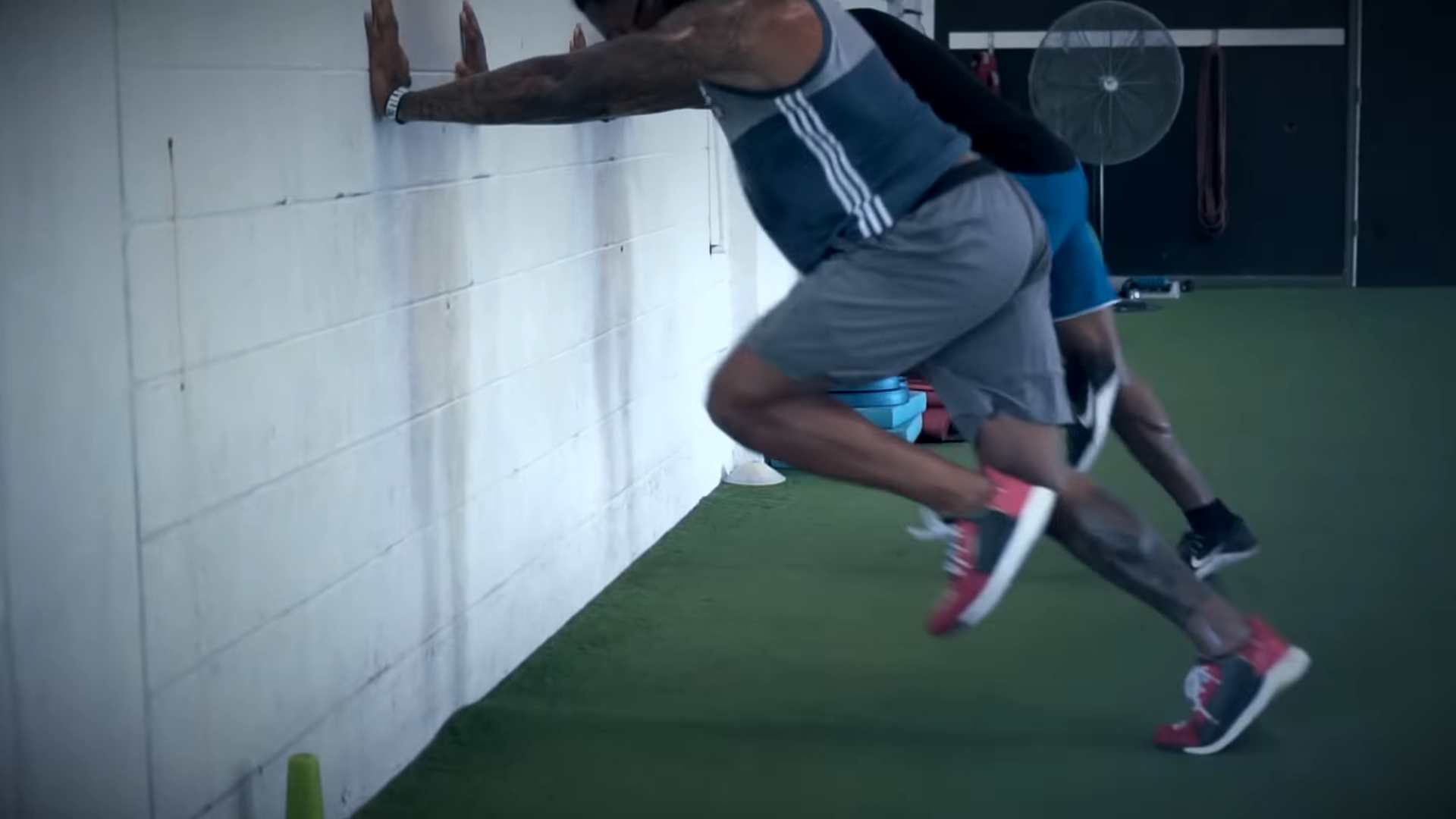 You can check out my newest program – Athletic Speed System.

Inside of Athletic Speed System, you’ll find my Isolate, Elevate, and Integrate method. And you can easily apply it to your acceleration mechanics.

For example, if you’re excessively flexing at the knee during the first 5 yards of your sprint, I’ll give you a drill that corrects that component of your sprint. Once that’s corrected, you’ll reintegrate it into a sprint, and most likely have fixed the issue. 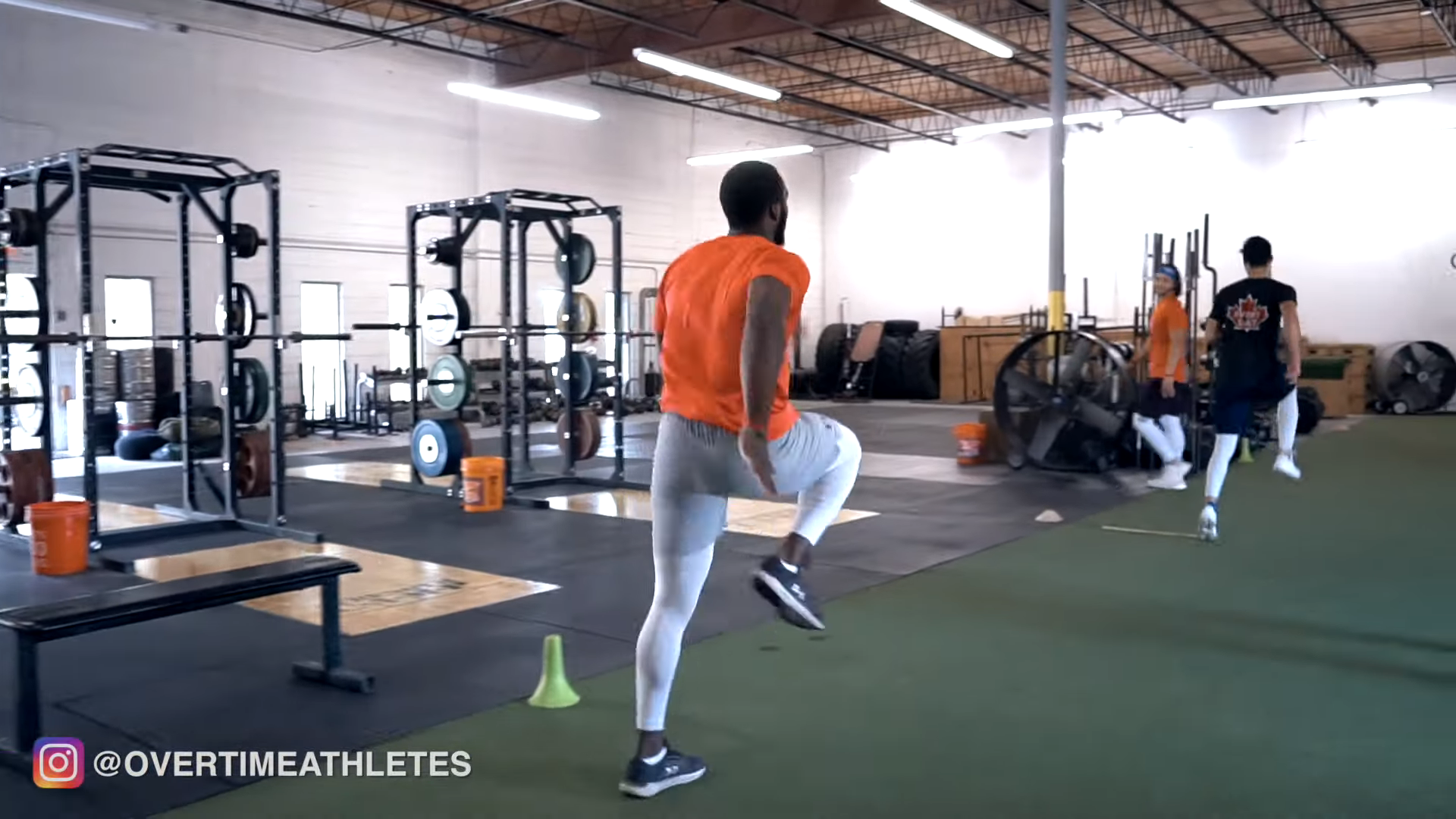 To read more about Athletic Speed System, just hit the link below: