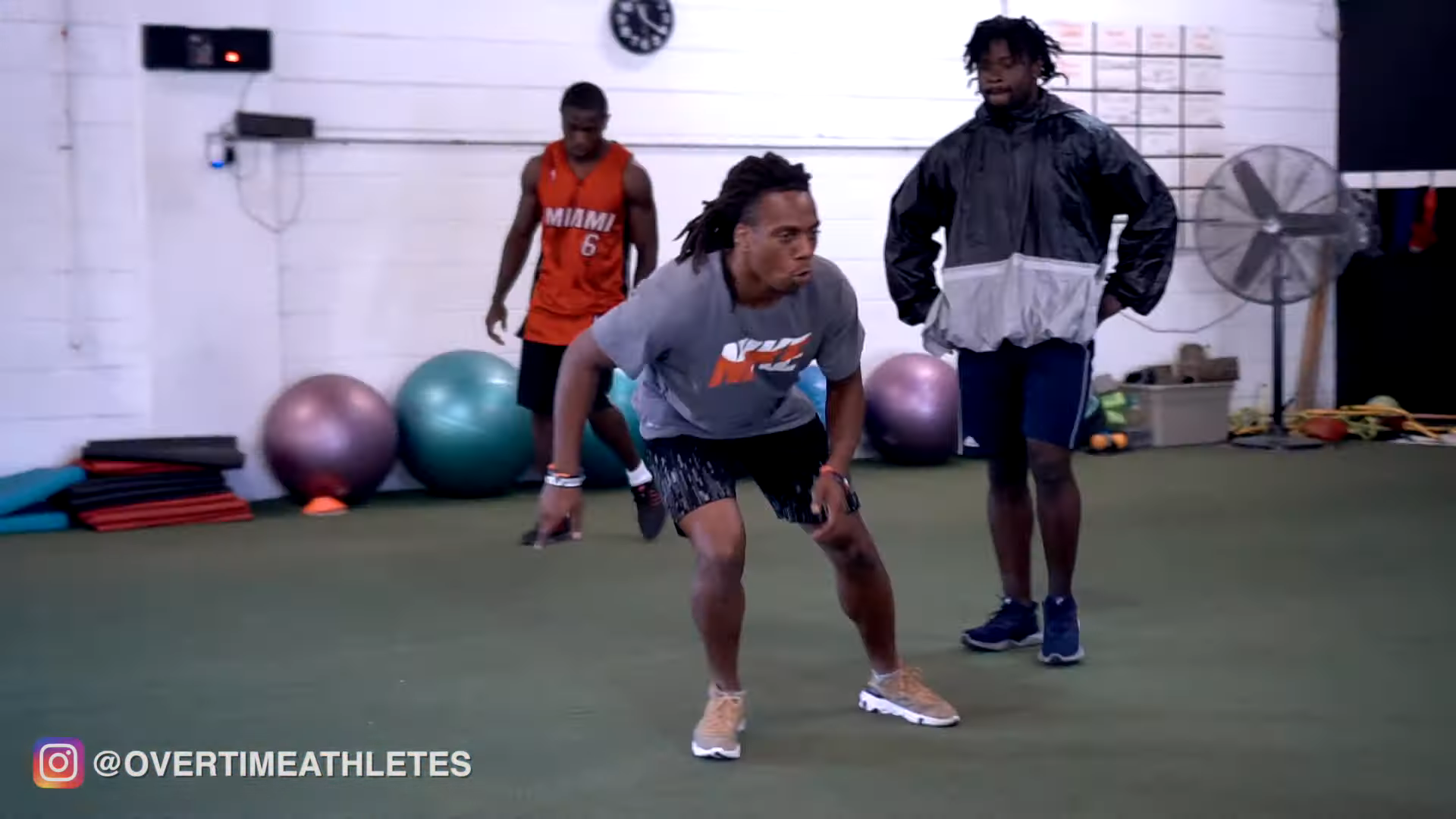 There are 5 explosive exercises I want to share with you to help you increase your rate of force development AND horizontal force production. They are:

These 5 explosive exercises will help you get a faster first step through various mechanisms. Below, I’m going to share the benefits of each movement and how to perform them for maximum effectiveness.

Single leg broad jumps should be a STAPLE in your training if your goal is to get faster first step. I mentioned above that if you want to get a more explosive first step, you need to increase your horizontal force production. Well, single leg broad jumps help you achieve this while independently working each leg.

Additionally, the single leg broad jump position is very specific to the position most athletes will be in as they go to take their first step.

Another great part about single leg broad jumps is that you can easily progress them to provide even more benefit to your first step quickness. You can perform single leg double broads, and single leg triple broads as you get better at your broad jumps.

This will help you work on your amortization phase, or the amount of time you spend on the ground while sprinting. Performing single leg double and triple broad jumps will also help you lower the time it takes you to produce maximal force. In other words, these movements will help you increase your rate of force development.

How to Perform Single Leg Broad Jumps for a Faster First Step:

When you take your first step, you most likely will explode out of a staggered stance. This means you will likely have one foot slightly in front of the other. This is where the staggered stance broad jump comes in.

If the athlete has a bad habit of pushing off one leg, it will show up here. Once the athlete learns to extend both hips before taking his first step, he will almost instantly have a faster first step. 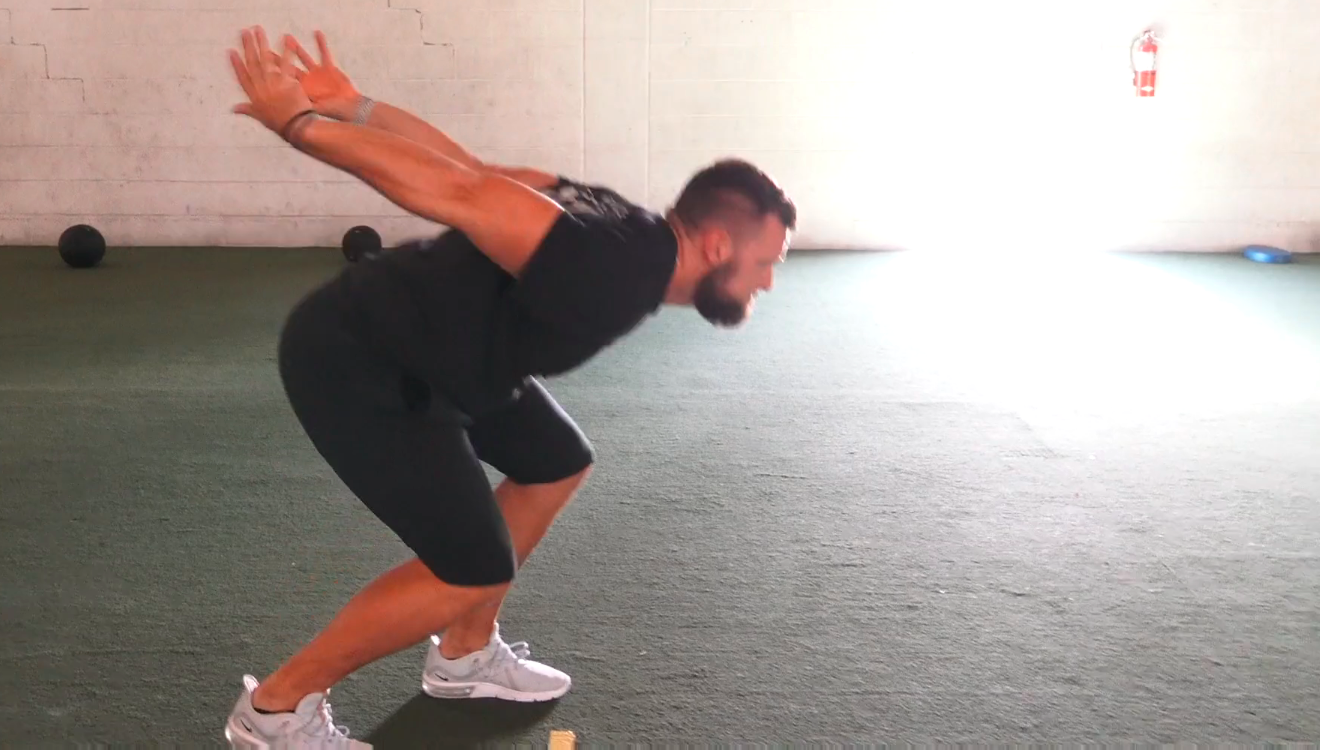 Positioning is another critical component of a quick first step. If the athlete tries to explode forward from an upright position, legs straight, and chest up tall, he’ll get out to a slow start. However, if the athlete has the knees slightly bent, hips slightly pushed back, and has a forward lean, he will generate much more horizontal force. This increased horizontal force will help him take a faster first step, and jump out to a faster start.

One drill that can help you get used to quickly entering this “golden position” is the falling start. Falling Starts force you to lean forward until your forced to catch yourself or fall on your face. This basically forces you into the golden position with a forward lean and positive shin angles. Again, this is the most optimal body position to generate horizontal force AND have a faster first step.

How to Perform Falling Starts:

Reverse lunges become even more potent for a faster first step when you add accommodating resistance in the form of bands. Accommodating resistance is the best strength training method to develop power because it allows the athlete to accelerate through the full range of motion of a lift. This means increased rate of force development, power, and explosiveness.

Again, the reverse lunge is specific to your acceleration and first step force output. When you add bands, it will help you create force quickly in your first step.

Finally, we move onto a contrast training combo for a faster first step. If you don’t know, contrast training is essentially tricking your body into moving with increased rate of force development. It works by performing a certain movement pattern with resistance. The presence of the resistance heightens the nervous system. When you’ve completed your resisted set, you perform a similar movement pattern that is unresisted. Usually it’s an explosive movement.

Doing this allows you to perform that explosive movement with increased rate of force development and powerr.

That’s what we’re accomplishing with the combination above.

These jumps follow the same movement pattern as Bulgarian Split Squats, except without the resistance and they are more explosive. You should feel more “poppy” and springy when you perform these. That means the contrast training is working.

Your Program for EXPLOSIVE Speed

Thousands of athletes are already using it to become more explosive sprinters through ALL competitive sports.

Get all the details below: