First and foremost, our workout started with some football-specific speed training. Not only does this serve as an extension of the warm-up, it primes the nervous system to respond quickly and with power. Speed training before an upper body strength session is a good combination so you avoid tiring out the legs before a big lower lift. It’s also just a good excuse to get some sprints in with these NFL athletes…

For this particular session we went through some reactive sprints using both verbal cues and a tennis ball to connect the mind and body during fast movement. You can see some more examples of this here:

After finishing up with speed training, we started a prep-series for the upper body. The goal is to prime and fully prepare the shoulders so that you’re ready to get into a push and pull complex. We started with some simple mobility including:

The first one here was a close grip bench press. Now, when I teach football players bench I especially like to use close grip since I want as much of our work in the gym as possible to translate over to the football field. Especially in situations like this when working with NFL players who have camp in about 4 weeks…

I like to start out with the hands just at shoulder width, maintaining a neutral position where the elbows will just brush the ribcage. Think about punching the ceiling both fast, and with power. You can use a football bar or any type of neutral grip bar for more translation. The focus was anywhere on less than 4 repetitions, eventually getting into the range of 2. The goal was to move heavier weights, fast. With acceleration on both the eccentric and concentric portion of the movement. This helps to really work on the stretch reflex through the pushing motion.

From here we contrasted that with a staggered stance med ball broad toss. Aiming to move less weight, but maintaining that same speed and power. This allows you to translate the previous heavy, strength movement into something more dynamic and athletic. Stay focused on quality repetitions and make sure to switch the legs up in your staggered stance.

Next we move immediately to our pull movements. Just like before we’re going with another contrast set.

The first movement was a one-arm row. My recommendation here is to go for as heavy as you can maintaining decent form. Notice I said decent, not perfect. Here I’d really you rather go for and get the full stimulus involved.

Now we’re going into a staggered stance, anti-rotation speed pull. Anti-rotation means there shouldn’t be any movement through the trunk. Wrap the band around your wrist and then hold on so you don’t have to worry about grip as much. Then get into your strong staggered position and just row on repeat focusing on driving the elbow back and keeping the shoulder level. Again, we’re taking that heavy pull movement from the row and putting more speed and power into it.

* A lot of time I don’t see athletes really taking the time to add some speed into that pull pattern. That’s why it’s important to make sure you’re working through both those heavy slow movements as well as the faster and more powerful.

After that we got into our shoulder complex.

For this workout you’re going through a staggered stance curl to press. This kind of feels and looks like a clean to press because you’re doing it with dumbbells, but the whole goal is to get you working through the balls of the feels and get the weight overhead. Keep the elbows from flaring out. 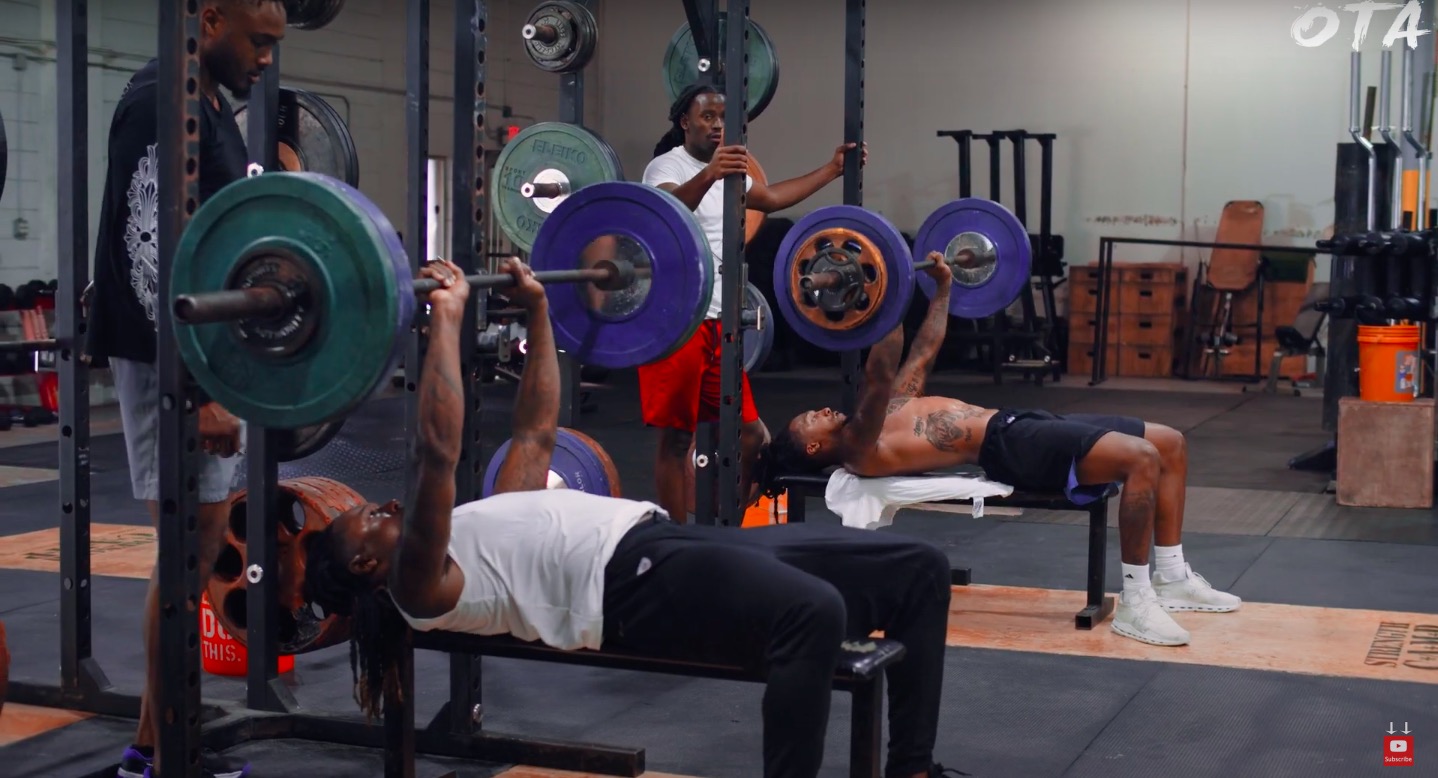 To work some of those finer detail muscles we’re going to add a bit of rotation at the end of the movement. Think of this like you’re turning the pinky-ends of your hands upwards as you reach the final portion of the movement.

Follow this up with just a few more accessory movements including:

If you’re interested in joining a full NFL level football training system check out the link below to change your game now: