How to Jump Higher Off One Foot

Keys to Jump Higher off One Foot 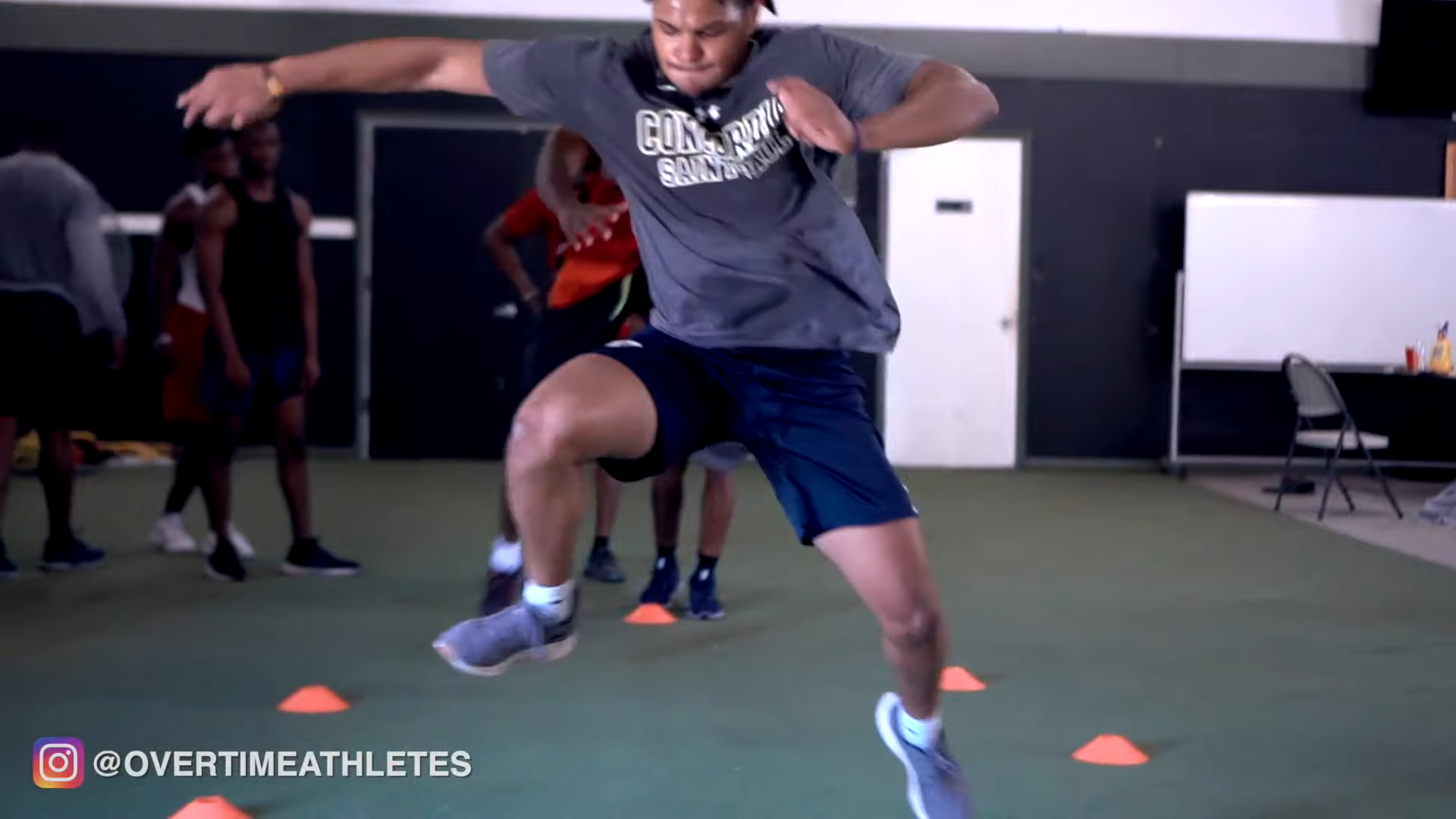 Every day I receive DMs from athletes asking how to jump higher off one foot. See, there are multiple types of jumpers out there. Some jumpers are knee dominant. Others are hip dominant.

There are also athletes who are naturally better at jumping off of two feet and one foot.

Today, I’m going to show you a few ways to bypass those built-in tendencies and jump higher off of one foot… Starting today.

Before we jump in, it’s critical that you know… The body is a cohesive machine. And with a machine, you can’t cut a wire and expect things to run smoothly. In the same way, you can’t just train one certain way and expect to see maximum athletic results.

And we’ll take a cohesive approach in helping you jump higher off one foot.

Let’s cut the talk and get into it: 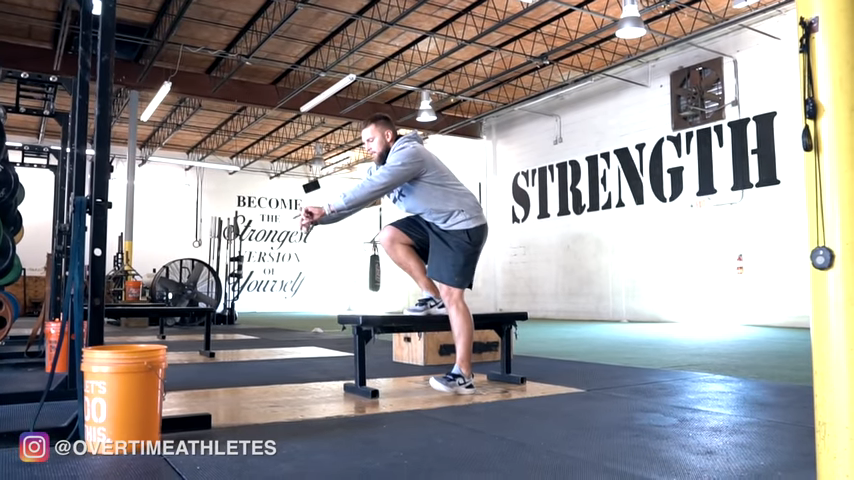 The first key you need to nail down to jump higher off one foot is your structure. More specifically stability.

Stability consists of neuromuscular activation as well as positioning. In other words, to be stable your joints have to be in the correct spots AND the right muscles need to be firing.

If your stability is lacking, not only will your one foot jumping suffer… But, you’ll also expose yourself to injury.

To achieve adequate stability, you’ll need to use a combination of stretching, mobility, and corrective exercises. 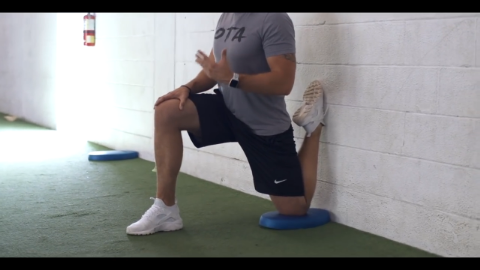 The muscles that restrict an athletes ability to jump lie in the hip flexors. Many athletes spend a lot of time seated behind a desk, or on their couch playing games.

This causes the hip flexors to tighten up and restrict their athleticism.

A lot of athletes are also exposed to improper training programming that is quad heavy. This further restricts their athleticism AND exposes them to injury.

Stretching is one tool that will reverse this damage.

Believe it or not, if you perform this ONE stretch below, you can possibly see your vertical go up a couple inches in one day.

You also have to keep in mind that it takes a daily effort of stretching to reverse the damage that too much sitting and improper programming has done to your structure.

The couch stretch targets the hip flexors. To perform this stretch, you’ll place one foot flat on the ground and the other knee on the ground. The closer your knee is to the wall, the more intense the stretch will be.

Once you find a knee position that is not to painful, but not too easy, push your hips forward and pick your chest up. You don’t want an arch in the low back, but you also don’t want a slouch. 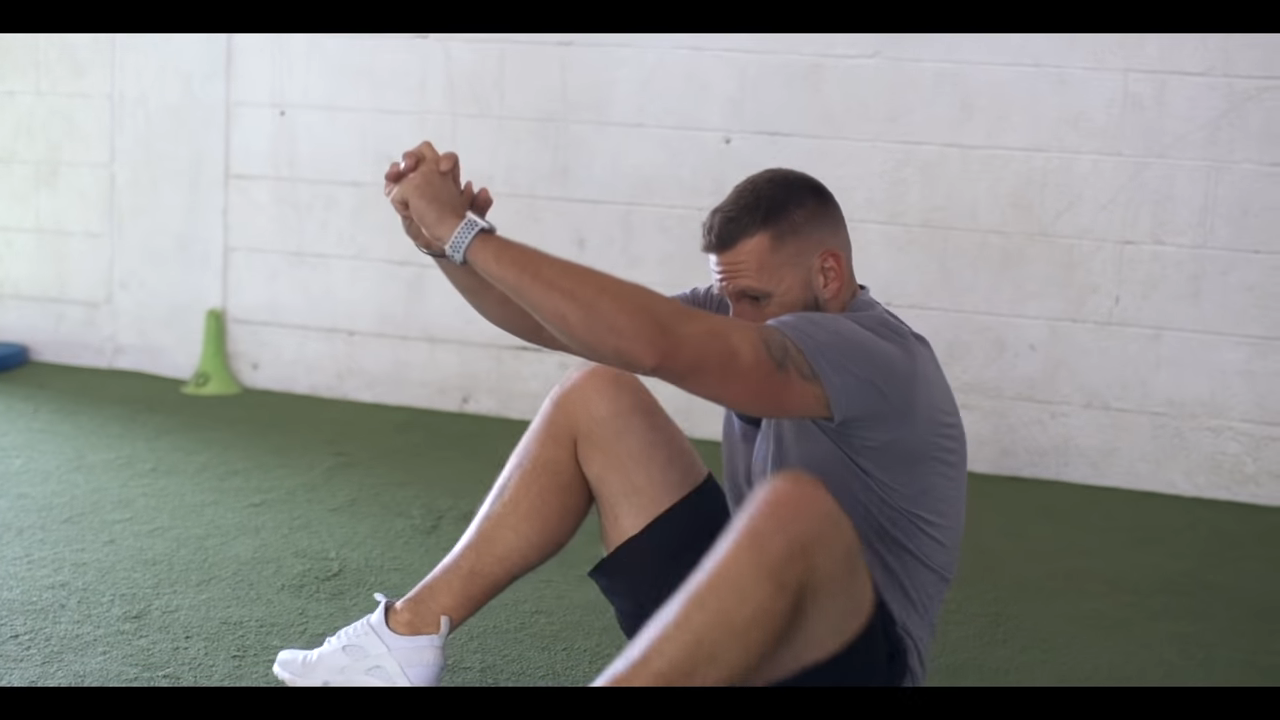 Mobility is a strategy used to increase the range of motion of a joint. In this case, we’ll be mobilizing the hips.

I start every session with a hip mobility and activation warm-up. I’ve shared that in other areas of the blog.

Today, I just wanted to share one simple and effective mobility exercise that you can perform every day…. With incredible results:

Start in a quadruped position. Lift your knee as high as you can out to the side with that leg bent 90 degrees.

Perform 5 on each side.

Next, kick your leg straight back, then leading with the knee bring it around the side and back down to the ground.

Perform 5 on each side. 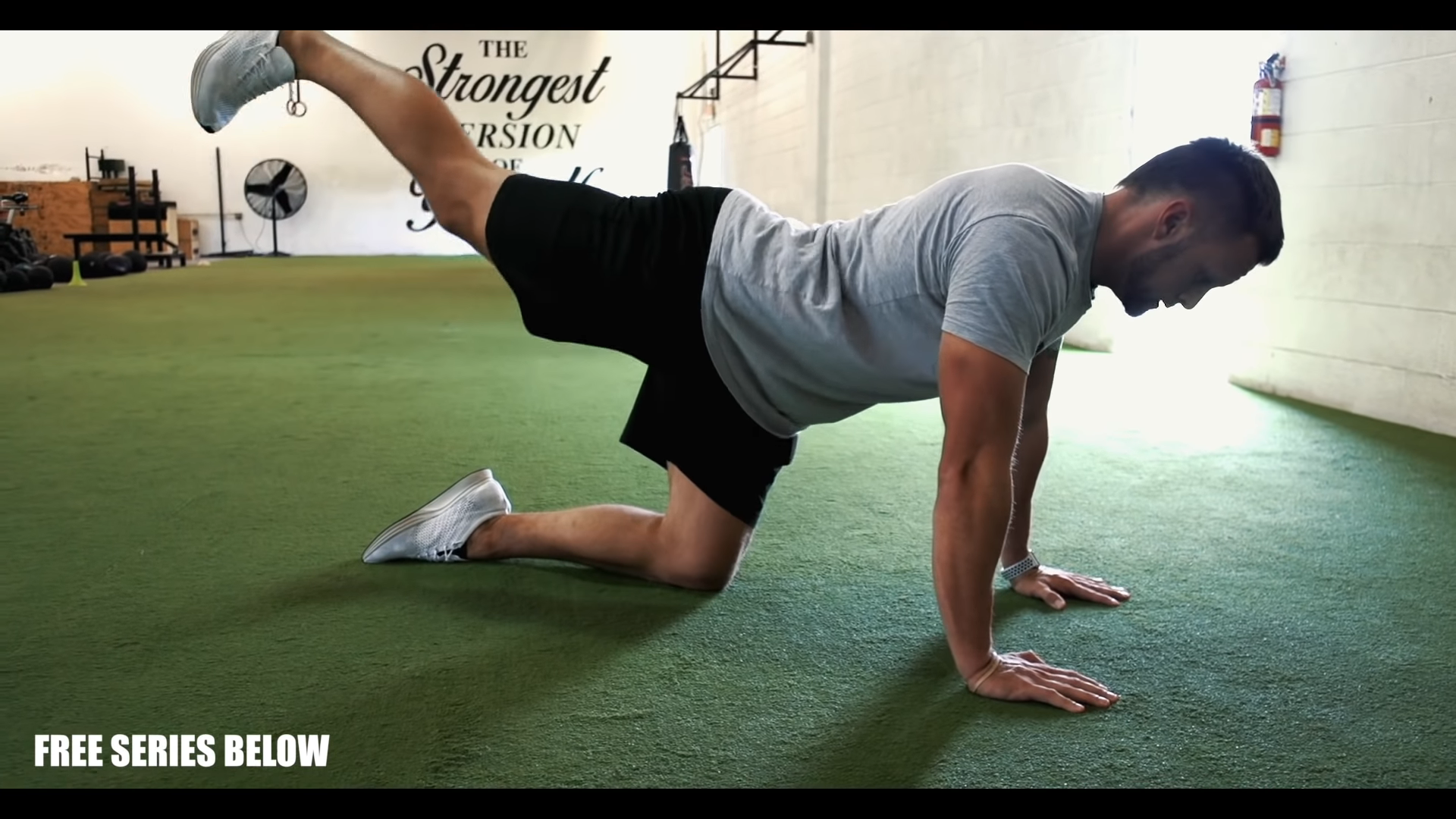 I’ve written about these correctives on other areas of the blog. One of the best posts to read for jumping activation exercises is 3 Knee Stabilization Exercises for Jumpers. Read that and execute on those exercises for higher one foot jumping. 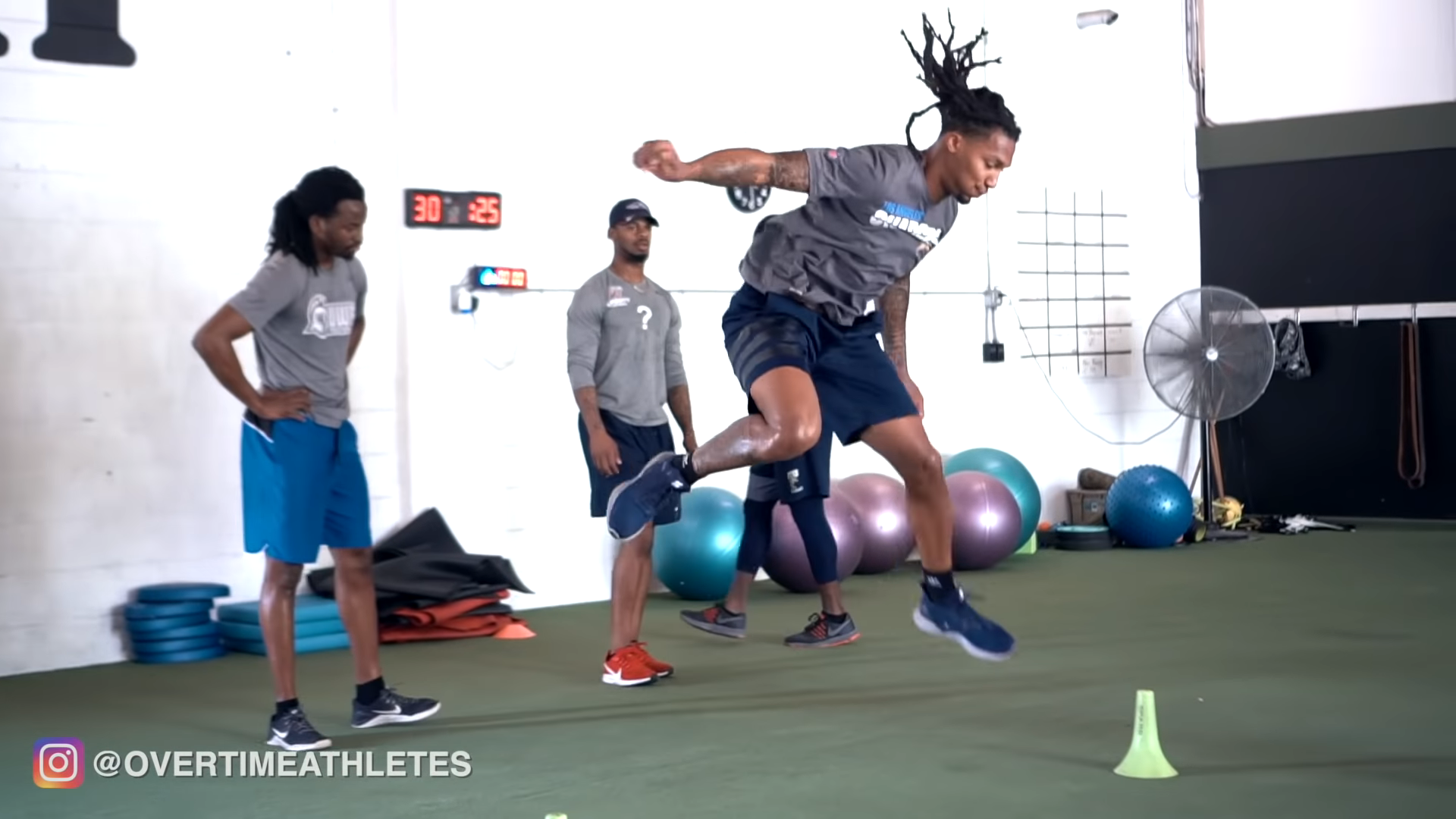 The next key an athlete needs to nail down to jump higher off one foot is his explosiveness. Explosiveness is an athlete’s ability to produce maximum force quickly. Obviously that’s critical for one foot jumping.

Getting more explosiveness isn’t JUST about picking the right plyometrics. It’s also about how you manipulate them.

When I say that, I’m talking about Triphasic Training.

Triphasic Training is a way to isolate certain components of a movement and raise them through the use of tempos.

These tempos also allow you to manipulate your muscles into producing more powerful contractions, spending less time on the ground between jumps, and recruiting more fast twitch muscle fibers. 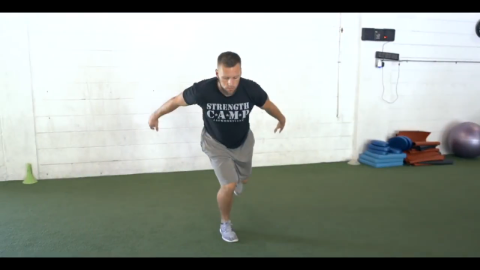 The single leg tuck jump is one of my go-to’s, especially early in an athlete’s training.

They teach an athlete how to be explosive one one leg, land properly, and remain stable during the whole movement. When I throw in a controlled eccentric tempo (like I did here), it also teaches them to absorb more force. If you don’t know, the more force an athlete can absorb, the more he can produce.

It’s important to know how to perform this tempo for maximum effectiveness.

Lower down with a “3 Mississippi” count. Pause for a fraction of a second, and explode up.

A lot of athletes have a tendency to sink down after their tempo before their upward movement. This defeats the purpose of the tempo.

When you work with isometrics you’re improving your transition between athletic movements and also teaching the body to recruit more motor units when performing certain movement patterns.

To get these benefits, you have to perform the tempo right.

Start on one leg and quickly accelerate to the bottom position of your jump. Make sure you only sink to vertical jump depth, no lower. Hold that position for a “3 Mississippi” count, squeezing the quads and glutes the entire time. Then, explode straight out of that position and land on two feet on the box. 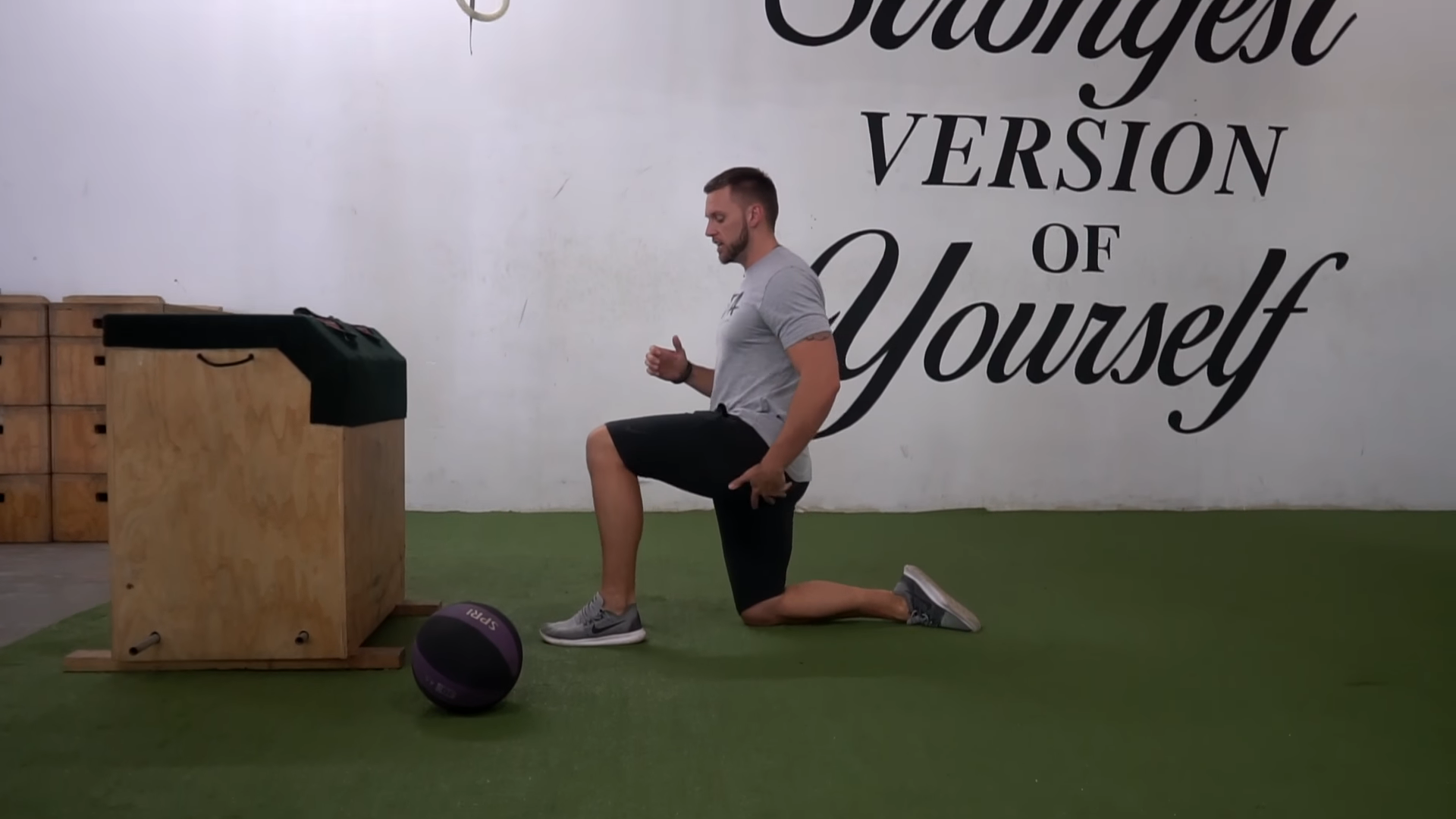 This plyometric takes the stretch shortening cycle out of the equation and forces the athlete to put their absolute power on display.

Then, explode off the front leg and land two feet on the box.

Learn More How to Jump Higher off One Foot

Another key factor that most athletes toss out when they’re developing a program for themselves is progression.

When you present your body with the same stimulus over and over again, it stops responding as powerfully. This is where progression comes in…

And it’s critical if you want to learn how to jump higher off one foot.

I have a very specific vertical jump progression that I use to get my athlete’s vertical jumps into the high 30s. And I share it inside of my Free Advanced Vertical Series.

Click Here to Enroll in The FREE Advanced Vertical Series