Skip to content
As a boy growing up in Florida and playing little league football it was a concensus that everyone wanted to play runningback.  No matter what size or shape every kid coming out in August wished to shake an opponent out their socks and tote the rock to the endzone.
Juking was what we did, we played backyard football and everyone was trying to juke everyone.  We didn’t think about how we did it, we just did.
As we got older and our bodies developed you could really tend to see the guys who became elusive had great body control.  But sometimes it takes a little bit more for someone to possess this agility capacity and have great cutting skills.

So today I wanted to answer a question from a lot of you guys on how to train “juking”, “shaking”, “cutting” and any other multi-directional performance.  I want to make this basic and simple so I’ll break it down into 3 different catagories to help you where you are at.

We can break this down into 2 important focus’s when we train.
Strength/Stability & Energy Transference.
You neeed strength and stability so your body can stay tight during a cut and not “give-way” in the upper  portion when you plant and move an opposing direction. In addition, your trunk needs to be able to transfer energy fast and efficiently to the upper body during a cut so you can produce enough force to quickly react to the body changing direction.

What I mean by body absorption is having enough relative body strength and elastic force for your body to be able to absorb the force it’s put under when you run full speed and be able to plant and generate the force to take back off.  So by breaking down this movement you would perform a great deal of’ depth jump variations.

If you want to get better at anything in life you need to perform it.  My suggestion here though is to pick simple cutting drills and perform them 100%.  Get your body used to the load first and then learn how to increase that.  Then from there you can throw in various plyometrics, cone drills, and reaction drills.

Agility training is more than just ladders and cones. It takes an in-depth approach to be fluid, quick, and agile. Particularly with a combination of plyometrics, focused change of direction work, and even weight training.

If you’re serious about becoming more fluid, quick, and fast, you can find this approach in my new Agility Program: Game Speed.

It’s my 14 Week Agility Training System that helps athletes all over the world display their speed in game situations.

Chris Barnard is a strength and conditioning coach at Strength Camp, a hardcore athlete training facility in St. Petersburg, Florida, as well as author of multiple performance programs. He has worked with athletes at all levels and from many different sports to produce the highest level of performance in each. He currently resides in St Petersburg, Florida and continues to pursuit breakthroughs in athletic performance. 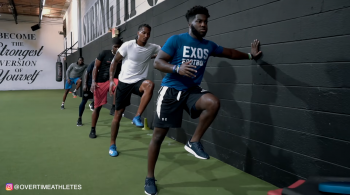