When it comes to baseball players, most coaches are neglecting a huge area of their training…

I see a lot of strength and conditioning guys spend most of their time working to correct pattern overload, and working on muscular imbalances within the shoulder.

And one of the keys to developing more raw power, hit more dingers, throw harder, and more is developing the core.

In the past few off-seasons, I’ve used a core protocol with my elite baseball guys who are having amazing results. They’re increasing their absolute power. Increasing their exit velocity (by sometimes 5 mph in less than 30 days). And their arm strength is improving.

Best of all… We’re seeing this directly translate to their ability on the field.

Since baseball is such an explosive sport, it’s essential for these athletes to spend time developing core strength. This trains them to efficiently transfer energy through the torso.

So if you’re hitting or pitching, you’re producing power out of the lower body. This power is transferred up through the torso and into the upper body allowing you to swing, hit and or pitch the ball.

Below I’m going to explain the protocol I use to develop core explosiveness for baseball players.

If you follow it, you could see a huge difference on the field.

This is where we first work on “wringing the athlete out.”

If you think about a baseball player’s daily movement patterns, we could compare their torso to a washcloth that’s being constantly twisted in one direction. The spine is going to be completely twisted up after thousands of hits or pitches.

My first goal is to “wring them out” by working on rotational movements in the OPPOSITE direction that they hit from. So if they’re a right handed hitter, for the first month we’ll start them off by doing everything on the opposite side.

Depending on the athlete, if I end up having someone work both sides rotationally, they’ll do double the reps on their opposing side.

While this won’t necessarily “cure” any imbalances, this does help to better align their spine and muscular system. So as we progress, the athlete is equipped to build strength from a better foundation.

They’ll be able to produce even more torque through the torso and have more power.

When starting month two, I’ll begin to focus on stabilizing through the core. On top of planks, side planks and any isometric work, here are two movements in particular that I love having my baseball athletes work on.

Both of these exercises work to create stability through the entire core. By keeping the lower body still, the midsection has to become stronger and more stable in order to overcome the increasing leverage point of resistance.

Finally as we get closer to competition, the goal is to have the athlete translate all the power and stabilization they’ve developed onto the baseball field. To do this, I’ll now begin to include movements that mimic the very same motion they perform during a game. Some of my favorite ways to do this include woodchops, cable work, and ballistics.

So for example, we may work with a medicine ball to create the explosive movement that is performed from the lower body to the torso. The motion of the upper body doesn’t need to match here since we’re working on loading weight in the rear hip and exploding forward.

We can create this same movement with a cable by doing a woodchop or reverse woodchop. Here you can begin adding in rotation and that closely mimics the motion used when hitting.

The goal is always to create as much force within a controlled manner as possible.

The Full Blueprint for Baseball Power

Core training is only one slice of the tiny pie that you need for a bigger bat, stronger arm, and more speed.

I’ve laid out that entire pie inside of Baseball Power Program. 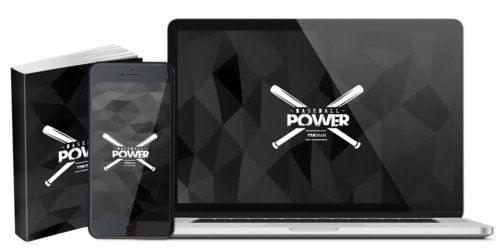 Many athletes out there try to program for themselves.

Wasting time they could be using to get better on trying to program their own workouts.

None of the greats created their own programming. Not Mike Trout. Not Aaron Judge. Not Giancarlo Stanton.

Check out Baseball Power Program Risk Free at the link below: