The first is a low-level plyometric that works to build a base of explosiveness. It’s also a connected jump, which means you’ll perform this plyometric repeatedly for the specified duration of time. You can think of this movement as a “power-conditioning” movement thats necessary for your ability to maintain explosiveness throughout a game.

Next one is for pure vertical jump. More specifically, it’s a resisted movement that challenges your ability to transfer force through your trunk. The more seamless your transfer of force is, the more explosive you’ll be/

The last plyometric is for change-of-direction, an ability that’s monumental to be successful in basketball. Specifically, it will help you make quick cuts, and change directions rapidly.

I’m also going to give you access to an example program that uses all of these movements in a cohesive program. This program includes:

Both of these plyometric teach a hooper how to produce and absorb force rapidly through the ankle, knee, and hip. This carries over to the game in many ways. For example, if you’re trying to grab a rebound and you jump up, tip it, and have to jump up again rapidly. But, this isn’t the only scenario.

This said, the pogo jump teaches the basketball athlete to produce and absorb through the ankle. The squat jump throws the hip and knee into the equation.

How to Perform Pogo Jumps:

How to Perform Squat Jumps:

If you don’t know, every time you jump, cut, sprint, or perform any other athletic movement, you transfer high amounts of force through the core/trunk. If your trunk isn’t stable, you’ll leak force. This means you won’t jump as high, run as fast, or cut as quickly,

The MB overhead box jump teaches the athlete to transfer force through the core efficiently, or else he won’t be able to jump high.

Here’s How to Perform a MB Overhead Box Jump:

The next basketball plyometric will help with that. It’s a single leg to 90 degree broad jump.

This plyometric for basketball players works multiple facets of athleticism. The first aspect of athleticism it works is your amortization phase. This is the time you’re in contact with the ground. Obviously, the lower your ground contact time is, the faster you’ll be able to cut on a dime.

Here’s how to perform the Single Leg to 90 Degree Broad Jump:

Now that you’ve seen the three plyometrics, here’s how I would plug them into a basketball plyometric and strength training workout:

The goal of this movement is to build the explosive capacity of the ankle. Perform as many jumps as you can in the allotted time while using as little knee and hip involvement as possible.

There are a few key points you want to keep in mind when you perform squat jumps. The first is to emphasize a great landing. Land softly and stick the landing. That means your hips shouldn’t sink when you make contact with the ground. Next you want to make sure you stay under control while jumping. Don’t move forward, back, or side to side. Stay in one spot.

The main point of emphasis with this basketball plyometric is to spend as little time on the ground as possible when transitioning between jumps.

Start small here. Many athletes underestimate the difficulty of this movement. Start on a small platform and gradually build up.

5. A. Accommodating Resistance Back Squat 6×3

Grab some bands and place them around each side of the barbell. This will allow you to accelerate through the entire range of motion of your squat, which will carry over to more power and explosiveness. Move the bar as fast as possible, and don’t go to crazy on the weight.

The goal of pairing these two movements is to increase rate of force production on the single leg tuck jumps. The heavy resistance of the back squat excites the nervous system. You can then use your hyper-stimulated nervous system to perform the tuck jumps with more explosiveness.

When you perform the tuck jumps, make sure the knee doesn’t collapse. Also ensure you reach full hip extension before tucking the knee.

Heavy reverse lunges are incredible for your athleticism. They improve first step quickness, sprint speed, and play a role in increasing horizontal force production. I programmed low reps here, so raise the intensity.

Here’s another accommodating resistance movement. Perform the 10 reps with full intent and explosiveness to gain the full benefits.

Finally, we finish with some core. Seated dead bugs are a great core stability movement, and when you add weights, it only amplifies the difficulty. Make sure to keep the chest up the entire time you perform your seated dead bugs.

In fact, you need an ENTIRE PROGRESSION to really reach elite levels of basketball athleticism. 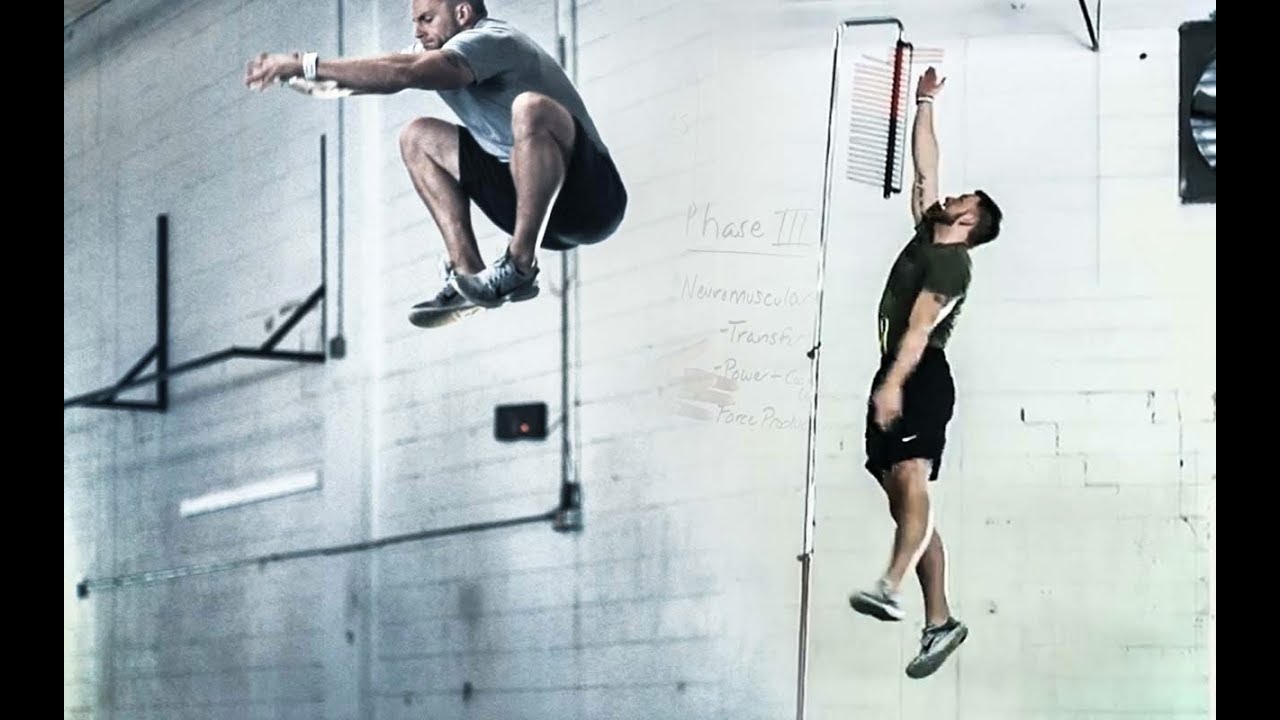 To learn how to craft your own approach to plyometric training, and improved basketball performance, you can join my FREE Advanced Vertical Jump Series.

Inside, you’ll learn how to turn high levels of strength into a higher vertical…

What to train before you start jumping…

How to progress your plyometric training…

And a whole bunch more.