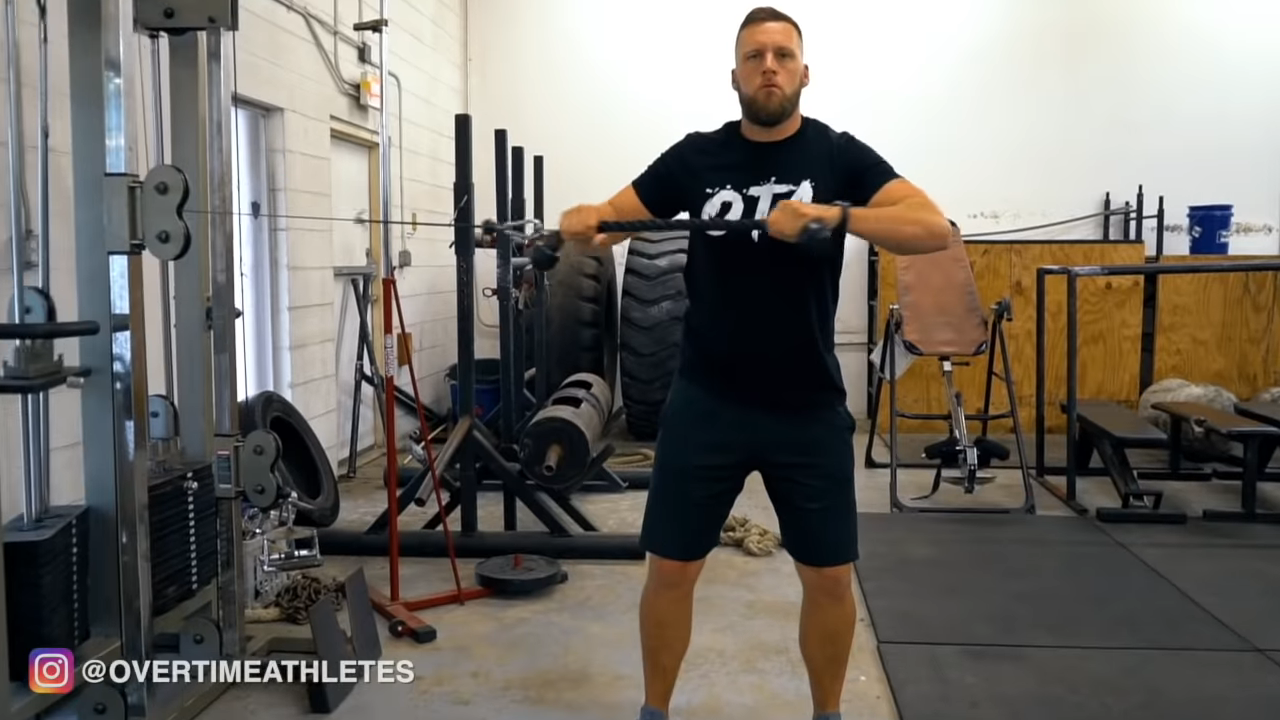 To be clear, the goal of any kind of core training is to progress it form its foundation form all the way to core training that will translate directly to competition.

This starts with creating a stable base upon which high amounts of force and energy can transfer through. In other words, core stability training is the jumping off point.

Why Do We Train Core Stabilization?

The main reason we train core stability is because the trunk, or core, is not always creating movement.

An example of the core creating movement is a baseball player swinging a bat. In this example, the trunk creates the rotation the baseball player needs to swing his bat.

So, if the core is not always creating movement, what else does it do?

As an example, think of a wide receiver running a down and in route. The receiver sprints off the line about five yards, stops on a dime to cut towards the center of the field. During that change of direction, the core is resisting the force that wants to continue to pull the receiver forward.

There are dozens of small, intricate muscles that activate to prevent the receiver’s torso from toppling forward. Not only that, you also need the ability to transfer your efficiently when changing directions quickly. That comes with core stabilization.

The first area of core stability training for athletes is anti-rotation. Anti-rotation training works the deep core muscles and obliques to prevent rotation of the core.

The most practical benefit of anti-rotation training has to do with sprinting. A lot of athletes have a natural tendency to rotate the trunk while their sprinting. This causes them to leak force and lose speed.

One of my favorite anti-rotation movements is the Pallof Press.

How to Perform the Pallof Press:

The second area of core stability training for athletes is anti-flexion. Anti-flexion training recruits the spinal erectors as well as the transverse abdominis to prevent your body from being pulled forward.

Anti-flexion training has many very practical benefits for athletes in multiple scenarios.

It can help combat athletes resist being pulled forward by their opponents. It can also help them prevent being pulled out of position by the momentum of their own punches.

Anti-flexion training can also help football players stay stable while being pulled on by opponents.

One of my favorite anti-flexion movements is the Clubbell Carry.

How to Perform a Clubbell Carry:

An example of someone trying to fold you backwards is very real in football. When some guys get hit on the field, they have a tendency to extend at the back. This can be bad news, as the sudden jolt backwards can create a bunch of injuries.

Anti-extension training can help prevent this.

Anti-extension training can also help linemen engaged with other linemen, basketball players who get pushed from behind, and more.

One of my favorite anti-rotation movements is the Stir the Pot.

How to Perform the Stir the Pot:

The last area of core stability training for athletes is anti-lateral flexion. Anti-lateral flexion is your ability to resist flexing at the sides. An example is if you’re holding a heavy object, like a suitcase, in one hand, but not the other.

Your ability to resist lateral flexion is what’s keeping the suitcase from dropping to the floor.

This ability also has very real benefits for athletes. For example, if someone is trying to strip a running back, part of their ability to hold the ball in position through that pressure from their opponent is anti-lateral flexion.

On the same note, if someone is trying to swipe the ball from a basketball player, they need anti-lateral flexion to maintain their position.

Baseball players, golfers, and tennis players also need this ability to maintain control over their swings. This is especially true for tennis players, as lack of control could lead to them getting out of position.

My favorite anti-lateral flexion movement is a Suitcase Carry.

How to Perform a Suitcase Carry: